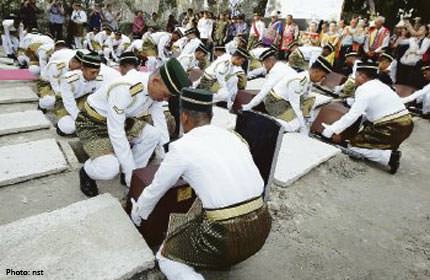 KUALA LUMPUR: Kuching will see on Tuesday July 26 a homecoming tinged with sadness.

On that day, the remains of 21 Iban trackers and Sarawak Rangers who gave their lives in the defence of the nation will be flown from Kuala Lumpur to the Sarawak capital for reburial, the culmination of efforts of many years.

These gallant men had been killed in action in the service of the British military during the Malayan Emergency (1948-1960), declared to fight communist guerrillas, in various states in peninsular Malaysia and Singapore.

The Royal Malaysian Air Force (RMAF) will fly the remains, in 21 jars sacred to the Ibans, to Kuching under an operation codenamed “Mai Pulai”, the Iban words meaning “bringing home”, and which involved also various government departments and agencies.

Sarawak Deputy Chief Minister Tan Sri Alfred Jabu said the aircraft carrying the jars would land at the RMAF base in Kuching at 12.30 pm on Tuesday.

“From there, the jars will be brought to the First Division Camp here for safekeeping before they are sent to their final resting ground the next day,” he added.

Jabu said a special ceremony befitting Iban warriors would held for the reburial at a cemetery behind St Joseph’s Cathedral in Kuching, near the World War II Heroes Memorial.

“Sarawak has been trying to bring home the remains of all these fighters for many years ago. And now, the wishes of their families have finally come true,” he said.

A previous operation, codenamed “Ngerapuh”, an Iban word meaning “moving the remains of the dead”, gathered momentum after a visit by Prime Minister Datuk Seri Najib Tun Razak to the Sarawak interior on Feb 23 this year.

Najib pledged then to help bring back the remains.

Jabu said five teams were formed, with the task of bringing back the remains of these heroes from Kedah, Perak, Kuala Lumpur, Melaka and Singapore.

“This is very significant, especially for the affected families, as some of them had lost their fathers, brothers or other loved ones,” he said, adding that they now had the opportunity to see that their family members were given a resting place “at home”.

The members of the five teams went to the five locations recently to make the final arrangements to bring back the remains.

Prior to the final phase of the operation, a ‘miring’ ritual was held recently, in conjunction with Ops Mai Pulai, at the office of the State Adat Istiadat Council of the Chief Minister’s Department at the Binamas building in Kuching to seek blessings for the safe return of the remains.

Jabu said the 21 jars were brought to Kuala Lumpur for the remains of the trackers or soldiers to be placed in them. The remains were also accorded a ‘genselan’ (sacrifice of pig or chicken) ceremony in respect of their previous resting ground.

“It (the exhumation) had to be done in a very careful manner and with full tradition so as not to displease the Gods,” Jabu said, adding that the exhumation was performed only by those who were spiritually blessed and possessed a special amulet.

The exhumation began on July 20 at all the graves, after a final respect ceremony was held at Wardieburn Camp here attended by some members of the Iban community living and working in Kuala Lumpur.

Lt Col (Rtd) Robert Rizal Abdullah, one of the key people behind the exhumation effort, said he was inspired in the endeavour after he read a plea by a Sarawakian woman who had spotted on a blog that the grave of an Iban tracker was on a roadside in Alor Setar.

“My heart bled when I saw the picture. I vowed to take the matter up to the highest authority. It became my mission,” Robert Rizal wrote in his own blog (pgbwarrior/blogspot.com).

In an interview with Bernama later, Robert Rizal, 61, a retired soldier who worked with Defence Ministry and the Sarawak state government on the operation, said the roadside grave was that of Private Ungkok anak Jugam.

It was moved to the side of the road at Km4, Jalan Langgar, Alor Setar, when a dual highway was built more than a decade ago, and the gravestone was left smack in the middle of the highway.

Later, the gravestone was moved to the St Michael’s Catholic Church cemetery, also in Alor Setar, in April 2009.

Robert Rizal, formerly known as Robert Madang Langi, is an Iban warrior himself. He has received the Panglima Gagah Berani (PGB), the nation’s second highest military gallantry award, after a courageous attack on communist terrorists in 1973 in Sarawak. He served the military for 25 years.

He said many Ibans had played an important role as trackers in helping the Commonwealth forces in the war against communist terrorists.

He said the first batch of 49 Dayak trackers were sent to Malaya on Aug 8, 1948, six weeks after the emergency was declared and the then colonial government of Sarawak decided to respond to the request from the Malayan government to help quell the communist insurgency in Malaya. They served as scouts in various military units on a three-month contract basis.

By late 1952, some 380 Dayak trackers were attached to various units in Malaya.

They were later grouped as soldiers into two experimental platoons which were organised into a regimental formation known as the Sarawak Rangers in 1953. The Sarawak Rangers were the predecessors of the current Royal Rangers Regiment.

One of them, Awang anak Rawing, earned the only George Cross awarded (for gallantry and heroism) during the Malayan Emergency, the civilian version of the Victoria Cross equivalent to the PGB.

For his contribution and effort, Robert Rizal has been asked to give a short speech during the reburial of the remains on Wednesday.

Asked on what he planned to say, the national hero said he hoped to read a poem specially written for the occasion.

“It would be an emotional feeling for most of us, but what I might say is this: After 60 long years of seemingly eternity, you (the 21 Iban trackers and Sarawak Rangers) are coming home, finally.” – Bernama