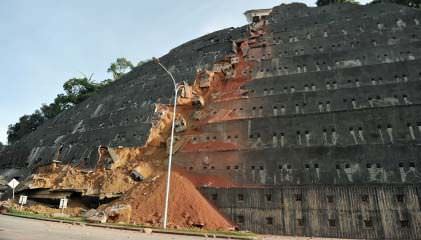 KUALA LUMPUR: The collapse of a concrete embankment in Bukit Setiawangsa due to land erosion has resulted in the residents of 46 houses being evacuated.

Puncak Setiawangsa residents association assistant chairman Fauziah Jamaluddin said only homes and shoplots opposite the site would be affected.

“Other houses in the area are not affected, people can go home and move around freely,” she told reporters at the scene.

She also said that Kuala Lumpur City Hall (DBKL) would be making an alternative route for residents to move in and out to east congestion as the road needed to be closed.

DBKL has also prepared the community centre for residents to stay in, and will also provide food.

However, the Public Works Department (JKR) are still monitoring the situation, and getting heavy vehicles to the site will be difficult.

As of 12.30pm, the soil in the area was still classified as very loose and unsafe.

Currently, 40 personnel from the Fire and Rescue Department, the Malaysian Civil Defence Department (JPAM), DBKL, Rela volunteers, and JKR are gathered at the area.

According to the authorities present, the vacated residents are staying with other family members.

Eight luxury bungalows near the collapsed barrier have been extensively damaged, with one house being split into two.

Nazrin Norzali, who lives three houses away from the embankment, said the split house belonged to an Iraqi family which had vacated several days before the incident upon noticing cracks in their home.

The concrete barrier crumbled at 10pm Friday night and buried the only access road from Taman Puncak Setiawangsa.

It is learnt that among the residents involved were former minister and Rompin MP Datuk Seri Jamaluddin Jarjis, and Setiawangsa MP Datuk Seri Zulhasnan Rafique.