Nabil goes to Europe in search of ultimate dream 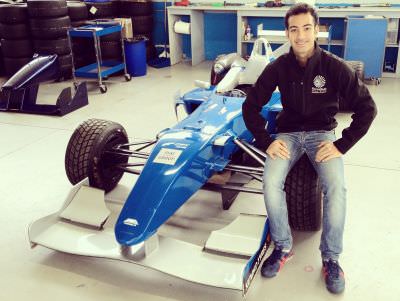 PETALING JAYA: A sore neck was a sobering reminder for Nabil Jeffri of the power of a Formula Three car as he returned home after completing six days of testing in Europe.

But the 19-year-old is taking things in his stride and feels there is no turning back as he gets ready to go for his debut season in the German F3 Championship next year.

Nabil, who finished runner-up in the JK Racing Asia Series Championship early this month, is on the verge of finalising a sponsorship deal to do three years of racing in the Formula Three series. His ultimate goal is to break into Formula One by 2017.

“It (F3) is the next step for me to go after three years of single-seater racing in Asia (JK Racing Asia Series).

“Europe is where I have to go now if I am serious in developing my next goal to be a winning professional driver.

“I already got a seat offer from Eurointernational and my management team is working on finalising the sponsorship.

“We hope to finalise things by next month so that I can focus on getting ready for the new season,” said an optimistic Nabil, who finished sixth overall out of 25 drivers in the two-day session in Valencia over the weekend.

“That was my second private testing in an F3 car. I did my first testing in Varano, Italy, where I managed to break the circuit’s lap record.

“I was told I should be doing about 12,000km of testing if I am serious about getting ready and be able to make my presence felt when the season starts in April.

“I hope to go for another round of private testing in Italy in February before the actual official testing begins in March,” said Nabil.

He added that it was an eye-opening experience driving an F3 car.

“It was fantastic experience to learn the ins and outs of F3. I am amazed at how fast the car was compared to the previous series I was doing.

“The steering felt heavy and you can really feel the downforce.

“I thought I was fit but I ended up having a sore neck.

“It’s something I am getting used to. Now I need to work on raising my fitness level before I return to Europe,” said Nabil.