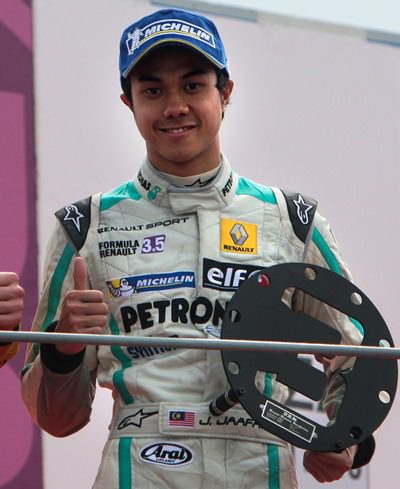 JAZEMAN JAAFAR heads off to Barcelona this week, as he prepares for the final event in the World Series by Renault headlining race category, the Formula Renault 3.5 Series. Driving with Carlin, Jazeman has contested eight rounds of the championship so far in his first season of racing in this series.

The Barcelona circuit is a regular venue on the Formula One calendar and provides Jazeman with experience of racing at a top-level European track, in preparation for his career progression through the ranks of the motor racing categories.  A technically demanding track, Barcelona has a few overtaking places, particularly in turn 1, which is the end of a long straight and in Formula Renault 3.5 Series, Jazeman has the use of F1-style DRS along the main straight which can prove useful for passing manoeuvres in this section.

Jazeman, a PETRONAS Talent Programme driver, raced at the circuit over three years ago in his two season of Formula BMW Europe. He had some strong results at the Spanish track, including a podium in the first race of his second season. Since this time, his only return to the venue was in the official test of FR3.5 Series in October last year, finishing sixth quickest.

Jazeman hopes to complete his FR3.5 debut season on a high, saying, “Barcelona is one of my favourite circuits on the calendar and I have had some good results here, so I want to finish my season on a high with more strong points finishes. The weather forecast looks good too, so it would be great to get some quality dry running for the finale.”

Of the Barcelona track Jazeman adds, “It’s a great track to race on, as there are a few passing opportunities and it mostly quite a fast, flowing track, it’s just the last sector which is a bit slower. Getting my car set up for this track will be key to my success for the weekend, so I need to get plenty of track time in the free practice sessions and really work hard with my engineer and Carlin team to make sure we have the pace in the car for a strong qualifying. After that, it’s the final two races of this year in this car for me.”