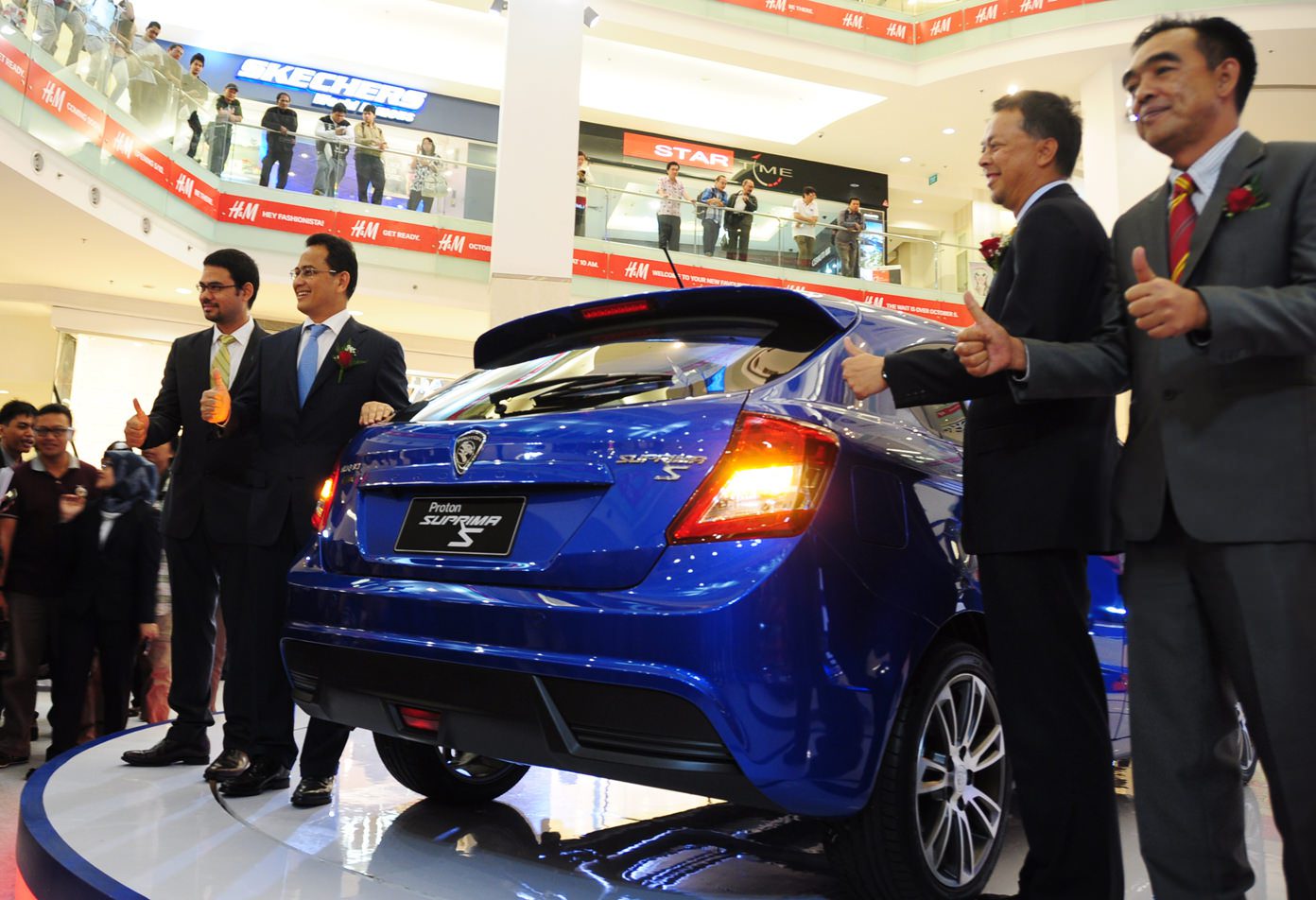 The Proton Suprima S was unveiled at the Atrium Gandaria City Mall in Jakarta by Tuan Syed Hasrin Tengku Hussin, Deputy Head of Mission of the Malaysian Embassy in Indonesia, who was accompanied by Chief Operating Officer (Commercial) of PROTON, En Hisham Othman and En Mohd Asri Khayan, Head of PROTON Edar Indonesia.

The name ‘Suprima S’ is derived from the root word “supreme”, and reflects superiority in engineering, safety and performance that has been incorporated into the model. The youthful hatchback is PROTON’s most well-equipped product to date and was conceived to meet the demanding needs of modern lifestyle, as suggested by its dynamic and sporty shape, a premium interior and superior engine performance.

Only the Premium variant will be available in Indonesia, and it offers features such as PROTON Infotainment with Android-based Operating System, rear LED light guides, DRL (Daytime Running Lights), Hill-Hold Assist, and Park Assist with front parking sensors.

The Proton Suprima S is powered by PROTON’s 1.6L Turbo engine. Mated with PROTON’s 7-speed ProTronic CVT, it delivers power and torque equivalent to a 2.0-litre naturally aspirated engine. The 1.6L power plant produces 140 PS at 5000rpm, and with a maximum torque of 205Nm from 2000 to 4000rpm. And as with all Proton models, its driving dynamics is enhanced with LOTUS Ride and Handling.

According to En Hisham, the Proton Suprima S offers features never before seen in a Proton model, with safety topping off the list of priorities for PROTON. “The Proton Suprima S comes with the highest safety standards PROTON has offered, topped off with a 5-Star ANCAP safety rating. This is the future we envision for all our products and services, and represents the benchmark we set for the standards and quality that PROTON aims to deliver to its customers. Furthermore, the specs of the Premium variant is also identical to that of the Premium variant of the Suprima S launched in Malaysia.”

Other highlights of the Proton Suprima S include 7-spoke, 17-inch rims and a 7-inch touchscreen with built-in navigation system. Additional features in the Premium variant include full leather seats, Push Start Button, paddle shifts, and auto cruise, amongst many other features.

“With the introduction of the Suprima S in Indonesia as PROTON’s new star, we hope to capture the hearts and minds of car lovers; and convince the Indonesian public that PROTON remains committed in meeting the demands of customers and to continue producing a variety of products that offer driving enjoyment and satisfaction – and most importantly, car that are safe, of high quality and value-for-money,” said En Hisham.

At the launch, PROTON also introduced the Proton Exora Star FL, a new variant of its best-selling Exora Multi-Purpose Vehicle (MPV), which comes with all-new front and rear lights, as well as new front and rear bumpers.

PROTON, established in 1983, is a wholly-owned subsidiary of DRB-HICOM Berhad and Malaysia’s largest manufacturer of automobiles, and the only full-fledged OEM car manufacturer in South-East Asia. With operations from the UK to the Middle East, and across South-East Asia and Australasia, PROTON produces cars to suit a range of consumer demands and preferences.

Its offerings include versatile and reliable four-door family vehicles such as the Saga and Persona, the Satria Neo three-door hatchback for the young-at-heart, stylish executive sedans such as the Prevé and Inspira, spacious and affordable multi-purpose vehicles like the Exora, as well as world-renowned sports cars from LOTUS. Most importantly, PROTON models are developed with LOTUS Engineering, offering customers superior ride and handling experience in every drive.

PROTON’s inception as a key driver of national development has seen the brand accelerate its learning curve through technology transfer with strategic partnerships and technical collaborations. By listening to the needs of customers, PROTON cars are now steadily on track to achieve the mission for the future, with PROTON set to become a marque which builds quality and safe cars with passion and soul; cars that are a delight to drive – and a pleasure to own.