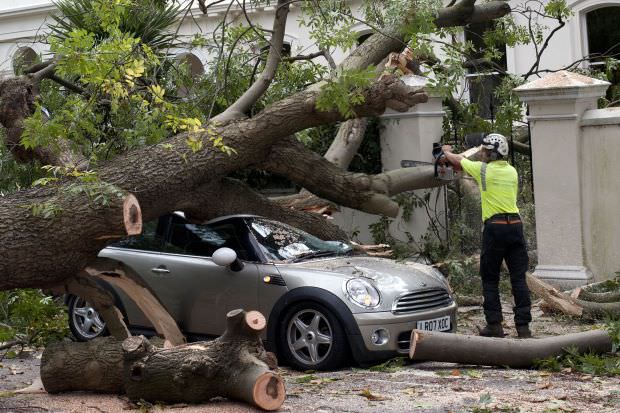 The Prime Minister, who is in the British capital to attend the Ninth World Islamic Economic Forum (WIEF), was scheduled to depart yesterday morning on the Government’s official aircraft from Luton airport to Manchester.

“The Prime Minister has to cancel the trip to Manchester due to bad weather which led to an advisory against flying,” the Prime Minister’s press secretary Datuk Tengku Sharifuddin Tengku Ahmad told Malaysian reporters here.

Najib was earlier scheduled to attend the iM4U volunteer programme in Manchester at 1pm local time (9pm Malaysian time), which was to have been the first programme in Britain after he launched the British chapter of the iM4U in July.

Due to the storm, British Prime Minister David Cameron had reportedly chaired a meeting with related agencies to discuss contingency plans.

A Wisma Putra official said the British Environment Agency had in the morning issued eight flood warning alerts for southwest England while all train operators and airline companies had cancelled their journeys with over 130 flights affected so far.

The storm, which had built over the Atlantic, hit Britain yesterday during the morning rush hour with forecasters predicting it to bring the worst autumn storm in the country in at least a decade.

The British Highways Agency also advised all motorists to keep alert on the latest weather forecast after several road closures were announced.

Malaysian journalists who were scheduled to travel by land to Manchester ahead of Najib were put on standby this morning before being informed at 9am (5pm Malaysia time) that the trip had been cancelled.

However, the three-day WIEF at Excel International Convention Centre here will continue with Najib set to launch the event today. Cameron is also expected to attend the launch.

Najib was also scheduled to attend a reception, hosted by the City of London Corporation, here last night.