We should have won, says Raja 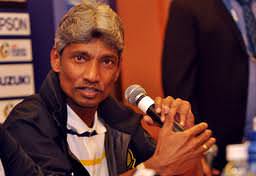 NATIONAL coach Datuk K. Rajagobal was a proud man after watching his side come from behind to secure a vital point against Bahrain in their 2015 Asian Cup qualifier, and says his men still have a bright chance of making it to Asia’s premier tournament after the 1-1 draw yesterday.

“I think this is our best match in the qualifiers so far. They players showed plenty of commitment and should have come away with the three points, but a point against a strong team like Bahrain is still very encouraging.

“We play them again in the reverse fixture next month. It’s not going to be easy, but if the players’ believe in themselves, anything is possible,” said Rajagobal.

The 57-year-old also paid tribute to goalscorer Norshahrul Idlan Talaha, who was a livewire throughout the game. “Norshahrul was absolutely brilliant today (yesterday). He didn’t follow us to China, but played such a superb game. The captain (Safiq Rahim) also had a good game, and even Amri, who at his age, showed tremendous hunger”.

“We know teams like Qatar and Bahrain, they will come and press us. But we handled them really well, and I think the tempo was too high for them, because in the second half many of their players pulled up with cramps”.

Rajagobal also defended his choice of selection and took a jab at those who slammed his tinkering ways.

The grey-haired gaffer also predicts a mammoth reverse fixture against Bahrain next month.

“We are certainly expecting a tough and aggressive match. I also plan to call-up some players who did not make it to the semifinals (Malaysia Cup). There is also a chance that we might play Kuwait before playing Bahrain, as we have been invited by them”, concluded Rajagobal.

Bahrain coach Anthony Hudson meanwhile was forced to be happy with a point after seeing three of his players pull up with cramps during the match.

“I’m not happy with the point. It turned out to be a very good point, but when we had our full team on the pitch and took the lead before halftime, I felt there was only one team on the pitch”, said the 32-year-old Englishman.

Malaysia take on Bahrain next at the Bahrain National Stadium on November 15.