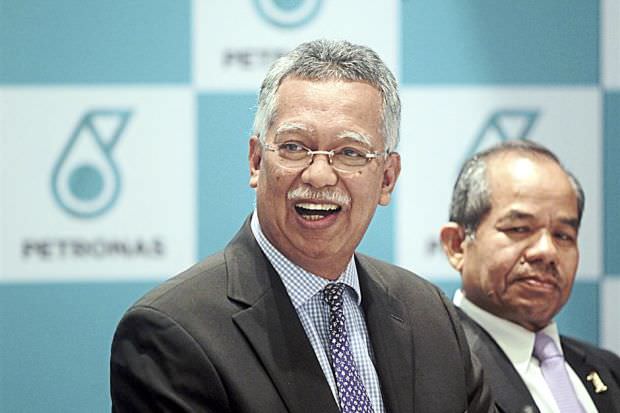 Shamsul(left): ‘We are in advanced talks with other buyers forthe remaining 12%. Chairman Tan Sri Mohd Sidek Hassan is seen on the right in this file pic:-

SINGAPORE: Petroliam Nasional Bhd (Petronas) has agreed to sell a 25% stake in its Canadian shale gas assets to an Indian company and an Asian gas buyer, according to president and chief executive Tan Sri Shamsul Azhar Abbas.

Petronas is looking to share some of the costs of bringing liquefied natural gas (LNG) from north America to energy-hungry Asia. Indian state oil and gas companies want to expand their portfolios of exploration and producing assets.

It already sold a 10% stake in Progress Energy Resources Corp, the integrated shale gas development and LNG project to Japan Petroleum Exploration and another 3% to Petroleum Brunei.

“I am pleased to announce that we have just finalised a further 25% equity participation from an Indian party and an established Asian LNG buyer,” Shamsul said at the LNG Supplies for Asian Markets conference.

He did not name the Indian company or the Asian LNG buyer, and wouldn’t disclose the price to be paid for the stake.

Sources had said earlier that Petronas was in talks with state-run Indian Oil Corp on a 10% stake.

(Bloomberg, quoting sources, reported that Indian Oil Corp had lined up a US$900mil one-year bridge loan to fund the planned purchase of a stake in Petronas’ Canadian gas projects).

Asked later about details, Shamsul said the buyers could only be announced next week, when the deal would be signed.

Petronas has previously said it wanted to sell up to 50% of the Canadian project, which means it now has another 12% to offload.

“We are in advanced talks with other buyers for the remaining 12%,” Shamsul said, without providing any further details. Reuters has previously reported, citing sources, that Petronas was also in talks with China firms as well.

Petronas, which has been expanding abroad to shore up future earnings as output slows at home, bought Canada’s Progress Energy Resources in 2012 in a deal worth around US$5bil that gave it shale gas properties in northeastern British Columbia. Development of the shale gas resources and an LNG facility of 12 million tonnes per year have been pegged at US$35bil.

Shamsul declined to comment on a media report saying the final investment decision on a refinery and petrochemical project in Johor would be delayed further.

Petronas last year announced a second delay to the project in Johor to 2018, and said a final investment decision would be made in the first quarter of 2014. – Reuters

A delay to the US$19bil petrochemicals complex could deal a blow to Malaysia’s economy as well as local oil and gas services firms hoping for work on the massive complex.