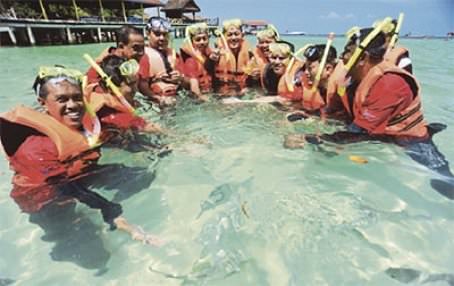 LANGKAWI: BINA Darulaman Bhd (BDB), a public-listed state government-linked company which engages in property, investment and development, is on a mission to save the marine ecosystem.

For a start, some 40 officers and personnel from BDB subsidiaries, led by its group managing director Datuk Izham Yusoff, took part in the coral propagation programme in Pulau Payar Marine Park during the company’s corporate retreat recently.

Pulau Payar is an uninhabited and well-preserved marine park which attracts some 140,000 tourists a year. It is famed for snorkelling and diving.

In the one-day programme, the group was briefed on the coral propagation methods developed by Ocean Quest Malaysia.

After the briefing by Ocean Quest founder Anuar Abdullah, the group proceeded with “coral fragging” where the coral fragments were cut and attached to suitable substrate for culturing.

The “fixed” corals were later placed into the deep waters of the island by divers.

Anuar’s propagation methods are well recognised internationally as they are efficient and only involve natural resources such as coral fragments and substrate.

Izham said the coral propagation project was part of the company’s corporate social responsibility programme and it would be proposed as an annual affair.

“This is an ongoing project and we will continue to monitor the growth of the treated corals every three months.

“This kind of project is important in educating and creating awareness of the significance of corals in the marine ecosystem as well as to encourage the conservation of aquatic life among the public.

“We are planning to expand the coral propagation project to include other islands in the state as part of our efforts to help save and preserve marine life in our ecosystem,” he said.

Before leaving the island in the evening, the volunteers spent an hour cleaning up the beach.