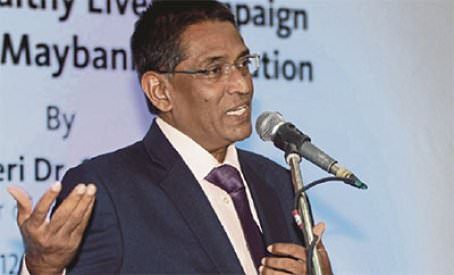 PREVENTION: Disease due to sedentary lifestyle

“Fatty liver disease is seeing a rise along with non-communicable diseases such as diabetes, high cholesterol and hypertension,” he said at the launch of the Selayang Hospital’s ‘Healthy liver Campaign’ which is supported by Maybank Foundation.

“This is a result of the public’s sedentary lifestyle,” he said, adding that prevalent liver diseases in the country were fatty liver, liver cancer, Hepatitis B, Hepatitis C and alcoholic liver disease.

Dr Subramaniam stressed that educating the public on prevention was better than trying to cure diseases and to treat organ failures that come with it.

“If detected at the early stage, it can be treated before reaching a critical level where treatment becomes more complex, longer and expensive.”

He said to date, 63 liver transplants had been done successfully in the country and there were 98 on the waiting list.

“The main deterrent to conducting liver transplants was the lack of donors,” he said, adding that there was a rising trend of patients needing organ transplants.

Dr Subramaniam said most of the liver pledged to be donated could not be harvested as donors had contracted a host of diseases including fatty liver.

He said the public’s misconception that liver disease was suffered only by those who consume alcohol or misuse drugs must change.

“Alcohol consumption is only one of the many causes.”

The event also saw Dr Subramananiam launching the transit lounge at the hospital where discharged patients could wait until their bills were settled and taken home by family members.

Meanwhile, earlier in Putrajaya, Dr Subramaniam said the government was hiring more nurses for the public healthcare sector this year.

Based on a study last year, a total of 15,700 nurses were needed for government clinics and hospitals.

More than 4,000 new nurses had been employed to fill the vacancies last year, and the ministry was aiming to fill in the remaining vacancies this year. Officiating the International Nurses Day celebration, he said this move would solve the shortage of nurses in hospitals and clinics.