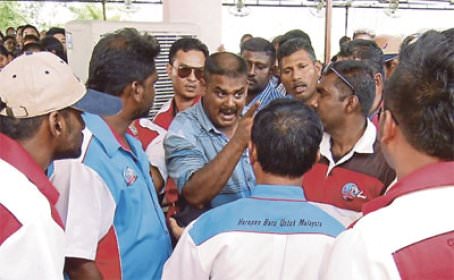 HAVOC: Party’s top guns blamed for frenzy as voting at more branches set to be suspended

PKR’S party election, which comes after two weeks of campaigning fraught with controversies, ended in chaos yesterday as voting in at least 30 of 119 branches was suspended.

More are expected to be postponed, especially in Negri Sembilan, where the Telok Kemang and Seremban branches were reported to have suffered discrepancies, such as a shortage of ballot papers and alleged breach of ethics.

While the party had said that some 500,000 members nationwide were eligible to vote, party sources claimed it recorded a low turnout of less than 20 per cent.

The situation in Selangor yesterday, where the battle royale between Khalid and Azmin for the deputy president’s post, ended in several altercations, including protests between factions at a number of polling stations.

He claimed voters were paid up to RM50 to vote for Khalid, who is contesting the deputy president’s post, and his followers who are contesting for division chief, Youth and women wing head posts.

“The voters were paid RM30 to vote for Khalid and RM20 for his team. We keep claiming that we are agents of change and reform but instead, we are abusing the system by allowing this to happen.

“I blame de facto leader Datuk Seri Anwar Ibrahim for this problem. He claims PKR is democratic, but he should have taught Khalid what democracy is all about.”

Manikavasagam also alleged that he was threatened through phone calls by strangers urging him not to contest in the election.

In Gombak, Salmah Abdul Rasit, 57, claimed she was stopped by men claiming to be from Azmin’s camp from entering the polling station area.

“Several men barred me from entering the polling station, claiming I was campaigning for someone other than Azmin,” said Salmah, who is also Gombak Utara PKR information chief.

In Sabak Bernam, tempers flared when supporters from opposing camps provoked one another into a brawl.

In the commotion, one supporters tried to attack another with a piece of wood but was restrained.

A female supporter also began attacking a PKR election committee worker by pulling her shirt amid a shouting match. After they were pulled apart, both made lewd gestures and spat on the ground.

Polling at the Sabak Bernam PKR branch was cancelled at 1pm yesterday and postponed after three of four division chief candidates brought up cheating allegations.

At the Kota Raja branch, the process was cancelled an hour before voting was set to close after several members climbed over a fence surrounding the polling station and rushed into the hall.

The men proceeded to seize the ballot boxes and smashed them on the floor, sending the ballot papers flying.

They also toppled tables and scattered food packages outside the voting hall before policemen arrived to control the situation.

Earlier, in Klang, three of four division chief candidates boycotted the polls, claiming there were elements of sabotage and non-transparency in the process.

One candidate, Zudin Arsmad, said: “Some of the voters’ names were not listed in the election committee’s computer system.

“However, when they checked at Klang division chief candidate Yew Boon Lye’s booth, they found their names listed,” he said.

Voting in Subang was also postponed because of overlapping voter registration numbers and candidates’ serial numbers in the information booklet differing from the ones printed on ballot papers.

The chaos yesterday prompted Khalid to tweet an apology to PKR members, saying PKR needed a transformation following the chaos.

In Port Dickson, PKR Telok Kemang branch chief candidate M. Ravi said his branch would refer their complaints of discrepancies during the voting process to the party’s election committee.