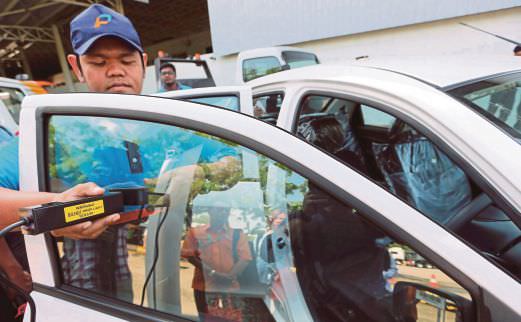 KUALA LUMPUR: THE government has approved the vehicle windows’ tinting regulation that was mooted in June.

The new regulation will allow motorists to tint their vehicle to up to 70 per cent of the Vehicle Light Transmission (VLT) rate for the second row passenger windows, compared with only 50 per cent previously.

The new tinting regulation will take effect on Nov 1.

Deputy Transport Minister Datuk Abdul Aziz Kaprawi said the decision to approve the proposal was made after taking into account views from stakeholders before it could be announced to the public.

“The delay in approval was because we had to delve deeper into issues and problems raised by road users, police, Land Public Transport Commission, Road Safety Research and the Road Safety Department.”

The New Straits Times had in June front-paged the proposal to review and fine-tune tinting regulations at a two-day workshop in Shah Alam. The workshop was attended by representatives from the Transport, Domestic Trade, Cooperatives and Consumerism, International Trade and Industry, Finance and Health ministries, 11 non-governmental organisations as well as Proton Holdings Bhd and Perusahaan Otomobil Kedua Sdn Bhd.

“The decision was the best one to be made considering all parties involved as well as all aspects of safety. The new tint level will help prevent crime and ensure safe driving for motorists.”

Meanwhile, RTD enforcement director Jaafar Mohamed said enforcement of the new tint regulation would be carried out after a month.

“Motorists will be given ample time to remove their tint films that exceed the allowed VLT rate. They need to exercise self-regulation to ensure that they abide by the law and not blame it on third parties (accessories shops).

“Operations on heavily-tinted vehicles will commence from November onwards and motorists should have no reason to disobey the regulations anymore.”

On the accuracy of VLT measuring device, Jaafar said RTD had advised car accessories shops to acquire the device to ensure accurate VLT measurements and motorists are assured of the right VLT rate of their tinted windows.

“The devices should also be recalibrated with RTD’s to ensure accurate VLT readings. RTD is not affiliated with any accessories shops that provide RTD-compliant or RTD-certified tint films.

“It is just a sales gimmick for the shops to attract customers. Motorists need to be aware of the approved tint requirement when installing such tinted film.”

Jaafar also commented on selected vehicles that come pre-tinted, saying that imported vehicles had been inspected by the RTD during the Vehicle Test Approval stage.

“However, if there are vehicles found violating this law, they will face the same penalty as other motorists.”