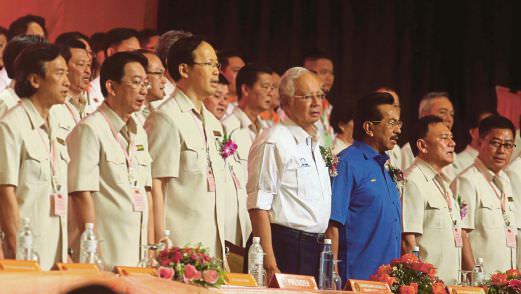 He said the first requisite for political survival and longevity of any party was to support and strengthen each other.

“You must move forward with your agenda for your community and for Malaysians. If we can do that, then our goal to re-energise the party has been achieved,” he said at the 25th Liberal Democratic Party (LDP) Congress held at Magelan Sutera Harbour here yesterday.

Najib praised LDP for resolving conflicts in the party, adding that
it was the first BN party in the state to represent the Chinese community.

“What matters is your commitment and dedication to the national objective and BN’s struggle.”

He said the BN government had the Chinese community’s best interest in mind.

Meanwhile, Teo said the party, which saw a leadership crisis last year, was back on the right track.

He said LDP, which joined BN in 1991, had been through two leadership crises, in 1995 and last year.

“In both crises, we weathered the storm that almost derailed the party by putting party’s interest above self interest. Other political parties formed in the same era were either defunct or had dissolved,” he said, adding that LDP would continue to stand tall and remain relevant.