Early winter pummels much of US, strands cars 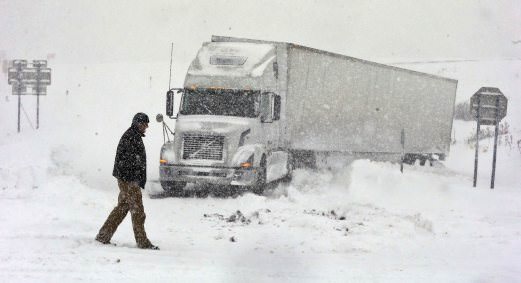 BUFFALO, New York (AP) — A huge lake-effect snow storm paralyzed the upstate city of Buffalo Tuesday, forcing state police on snowmobiles to deliver blankets to stranded motorists on the main highway across New York state on a wintry day when temperatures fell to freezing or below in all 50 states.

In a region accustomed to highway-choking snowstorms, this one is being called one of the worst in memory. Snow blown by strong winds forced the closing of a 132-mile (212-kilometer) stretch of the New York State Thruway.

Poloncarz was expecting the remaining motorists to be evacuated by nightfall because of plunging temperatures.

Meteorologists say temperatures in all 50 states fell to freezing or below on Tuesday. They say the low temperatures were more reminiscent of January than November.

In New Hampshire and elsewhere, icy roads led to accidents. Lake-effect storms in Michigan produced gale-force winds and as much as 18 inches of snow, and canceled several flights.

In Atlanta, tourists Morten and Annette Larsen from Copenhagen were caught off-guard by the sub-freezing weather as they took photos of a monument to the 1996 summer Olympics at Centennial Olympic Park.

“It’s as cold here as it is in Denmark right now. We didn’t expect that,” Larsen said, waving a hand over his denim jacket, buttoned tightly over a hooded sweatshirt.

In Buffalo, Brian Krzeminski watched the snow pile up outside the south Buffalo convenience store where he worked overnight and served free coffee to the motorists and pedestrians who came in off the city streets to get out of the blinding snow.

“There are people that came out to get a few things. We had some people who came in just to get a 30-pack of beer, which is kind of odd,” he said. “I’m constantly seeing cars get stuck.”

“We have tried to get out of our house and we are lucky to be able to shovel so we can open the door. Basically, that’s it, open the door,” said Linda Oakley of Buffalo. “We’re just thinking that in case of an emergency we can at least get out the door. We can’t go any further.”