Lodin clears the air on 1MDB 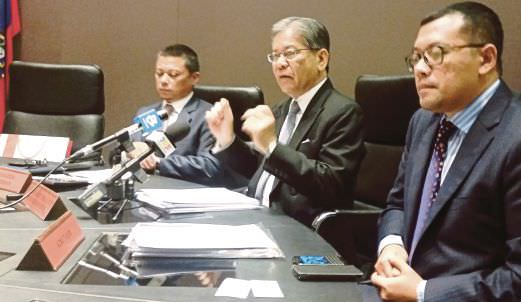 In a rare media conference, Tan Sri Lodin Wok Kamaruddin said the company was in good financial health, with its assets exceeding its debts.

He said 1MDB would be able to meet its financial commitments and that it would continue to add and unlock values of its assets, and generate a respectable return.

“We have very strong assets and plus the proposed listing of our energy assets, we are confident that we can raise funds to settle some of our debts,” he said at the 1MDB headquarters at Menara IMC in Jalan Sultan Ismail here.

ITS remaining funds kept in its subsidiary in the Cayman Islands will be brought back to Malaysia by the end of the year;

THE acquisition of its energy assets were not overpriced;

1MBD real estate investments are long-term play and will start generating returns in three to four years; and,

1MDB has put in place internal controls and risk management to ensure that its investments meet its internal rate of return.

Lodin said: “As a government wholly-owned entity, we have to be transparent and ensure that good corporate government practices are adhered to at all levels.”

He said in time, values would be added to the assets and subsequently unlocked to settle the debts.

He explained that the value of its energy assets bundled under 1MDB Energy Bhd would be unlocked once it was listed, and funds raised would be substantial.

He did not want to go into further details as 1MDB was in the midst of submitting its initial public offering proposal of the energy assets to the Securities Commission, which will happen soon.

“After putting in the infrastructure, we will see the value of the asset improve further. At TRX, an Australian public listed company, Land Lease, will develop a small portion of the land.

“A further four to five other domestic and international companies have expressed an interest to take part in the TRX development.”

He said the 70ha development would have a gross development value of RM25 billion to RM26 billion.

On the Bandar Malaysia commercial, culture, social and transportation hub, Lodin said relocation of the Royal Malaysian Air Force base and others at the 500ha site was ongoing and that development was expected to begin in two years.

“As we put in more infrastructure, the value of the assets will improve and 1MDB will benefit from it.”

On its funds that were placed in the Cayman Islands, a tax haven in the Caribbean, Lodin said the exercise had made a profit for 1MDB.

“The fund was initially our investment of US$1.8 billion (RM6 billion) in an oil and gas venture with a Saudi Arabian company. When the venture was found challenging, we converted the investment into Murabaha notes, which is a fixed-income instrument.

“Subsequently, the notes were
redeemed for US$2.318 billion, which gave us a profit of US$488 million.”

The fund was then transferred to 1MDB’s wholly-owned subsidiary in the Cayman Islands and invested in regulated funds.

From the funds, it had earned US$267 million in dividend.

“To date, almost 60 per cent, or RM4 billion, of the fund has been liquidated for settlement of 1MDB’s financial commitments. The balance will be liquidated before the end of the year.”

Lodin said 1MDB’s financial commitments would not be a problem to the government.

“If we just acquire assets without adding value, there should be concern about servicing the debts.”

As seen from its real estate and the energy assets, value has been added and continued to be enhanced and, once unlocked, it would benefit 1MDB, he added.