Italy’s president to decide on resignation at end of year 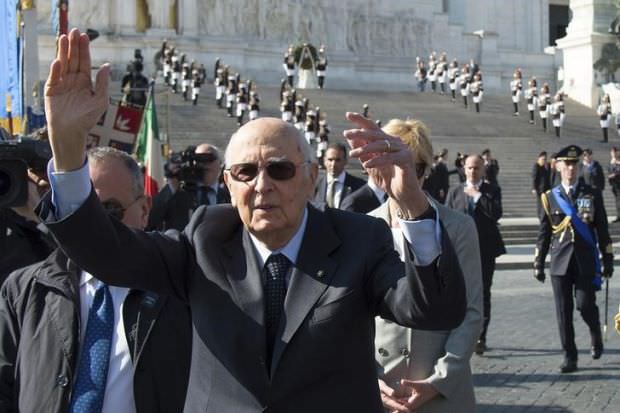 ROME (Reuters) – Italian President Giorgio Napolitano said on Monday he would decide whether to retire early when Italy completes its six-month presidency of the European Union at the end of this year.

Italian politics and media have been awash with speculation that the 89-year-old Napolitano is poised to step down, around five years before the end of his term.

The presidency, once a largely ceremonial role, has grown steadily in importance and Napolitano has often been seen as a guarantor of credibility amidst Italy’s notoriously unstable politics.

“It is absolutely gratuitous to imagine a resignation before the end of Italy’s EU presidency, after which the president will assess the situation,” Napolitano’s office said.

The president, who is elected by parliament and regional representatives by a secret vote, has the power to appoint prime ministers, dissolve parliament and call elections.

Napolitano, who backtracked on previous indications to agree to serve a second term in April 2013 at a time of political crisis, hinted from the start that he would not stay for his full seven year mandate.

Probably his most crucial decision was when he appointed the unelected but widely respected Mario Monti as prime minister to succeed Silvio Berlusconi and steer Italy away from the brink of bankruptcy at the height of the euro zone debt crisis in 2011.

He named Enrico Letta to take over from Monti following deadlocked elections held in February 2013, only for Letta to be ousted by his Democratic Party rival and current Prime Minister Matteo Renzi less than a year later.

Napolitano was viewed as a national saviour shortly after Monti’s appointment but his approval ratings have fallen sharply.

Relations have been particularly strained with Berlusconi, still the main figure on the centre-right, who has hoped in vain for Napolitano to grant him a presidential pardon following a conviction for tax fraud.

Speculation is rife over the next president but with Italy’s parties badly split internally there are fears the election will be as messy as in 2013. On that occasion no new candidate was able to muster the necessary majority, resulting in Napolitano’s unprecedented re-election for a second term.

A former communist, Napolitano was first elected to parliament in 1953. He was speaker of the lower house of parliament and also served as interior minister.