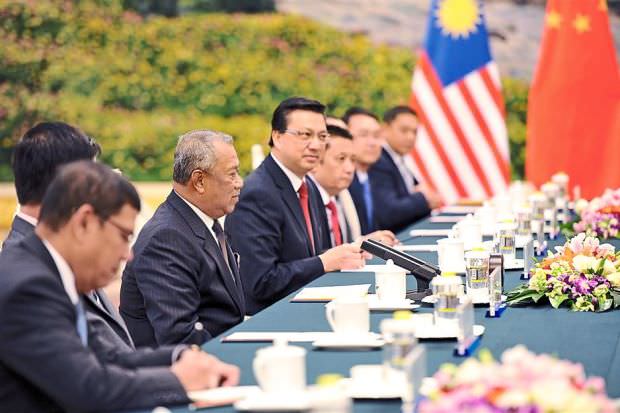 BEIJING: China has responded positively to a proposal to have Mandarin teachers serving at national schools in Malaysia, says Tan Sri Muhyiddin Yassin.

The Deputy Prime Minister, who is in China for a six-day official visit, said he raised the proposal during meetings with his counterparts, Chinese vice-premier Zhang Gaoli and Chinese Education Minister Yuan Guiren, here yesterday.

“Officers from both countries will work out the details, such as the number of teachers and language experts China can provide,” he said. “I suggested that the programme begin next year.”

Muhyiddin, who is also the Education Minister, had raised the importance of students mastering a third language during the recently concluded Umno general assembly.

He proposed creating positions for 30,000 language teachers in national schools.

“The co-operation with China will allow us to speed up the process,” he said.

Muhyiddin said he also put forward a request for Mathematics experts from China in a bid to raise the numeracy level in Malaysia.

“There are 500 Chinese Mathematics teachers in Britain and we are hoping for a similar co-operation with China,” he said.

Besides education, Muhyiddin said he discussed other issues of mutual importance with the two Chinese leaders.

“Zhang has made many suggestions to heighten trade and economic co-operation, including having more Chinese state-owned enterprises to invest in Malaysia,” he added.

Muhyiddin, who arrived in China on Sunday, is here on the invitation of Zhang.

Liow said he welcomed the proposal to bring in Mandarin and Mathematics teachers from China.

“This move proves that the Malaysian Government is attaching great importance to Mandarin,” he said.

“While we welcome Chinese Mandarin experts to Malaysia, we will continue to train more local Chinese teachers to ensure that Chinese education continues to be developed,” said Liow, who is MCA president.