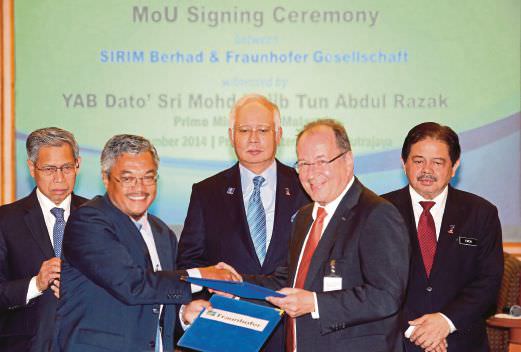 PUTRAJAYA: SEVERAL measures, including a two per cent interest rate subsidy for investment partners of small- and medium-scale enterprises (SMEs), have been outlined to grease the sector’s growth.

“It involves sukuk (Islamic bonds), meaning the cost will be pretty high.

“Thus, we have decided to give subsidies at an interest rate of two per cent to SME investment partners who have been identified,” said Najib, who is also finance minister, after chairing the National SME Development Council (NSDC) meeting here yesterday.

A total of RM310 million has been allocated for high-impact programmes (HIPs), including RM250 million for SME Investment Partner programmes to enhance early-stage financing for SMEs that will also receive a RM125 million boost from the private sector. For the purpose, innovation and productivity would be emphasised, Najib said.

“The SME master plan aims to raise the contribution of SMEs to the GDP (gross domestic product) to 41 per cent (by 2020) from the current 34 per cent.”

The master plan also strived to push the contribution of SMEs in exports to 25 per cent and employment to 62 per cent by 2020, he said, adding that since the master plan was evidence-based, a monitoring and evaluation system would be set up to track the progress of all HIPs.

SME Corp Malaysia, as the coordinator of the SME master plan, will track the progress of all HIPs through a dashboard and assess the impact of the programmes to the economy. The NSDC has also given the green light to establish an Export Promotion Council as an inter-agency collaboration to promote and boost exports, including by SMEs.

Another measure taken was to get better coordinated involvement from the public and private sectors through a specific Act known as the SME Bill.

The drafting of the SME Bill, Najib said, would include details on the role of the public sector, with focus on regulatory control and monitoring while the private sector would have a more proactive role through associations and chambers of commerce.

Consultation sessions — seeking the views and suggestions from the public before the bill is submitted to the Attorney-General’s Chambers and debated in Parliament — have been carried out in Malacca, Negri Sembilan, Sabah, Sarawak, Kelantan and Pahang.

“The consultation sessions will continue and are expected to end in January next year. If the draft is approved, the bill will be tabled in Parliament in the third quarter of next year and possibly enacted by January 2016,” said the prime minister.

The strategic alliance with Fraunhofer was made to strengthen SMEs development through adapting the German eco-system of SME development and to collaborate in advanced technologies, commercialisation and upscaling.