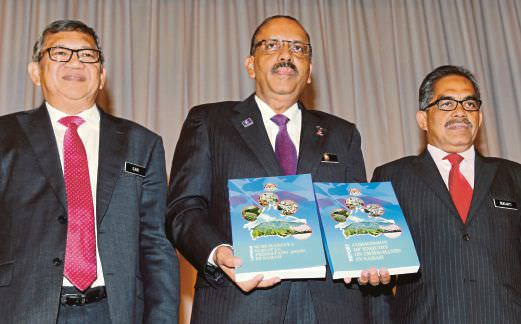 KUALA LUMPUR: THE Royal Commission of Inquiry (RCI) on Immigrants in Sabah said the so-called “Project IC” to grant blue ICs to immigrants more likely than not existed, but attributed it to Sabah’s National Registration Department (NRD) officers.

The six-member commission, in its 368-page report made public in Kota Kinabalu, Sabah, yesterday, acknowledged that a “clandestine” exercise had more likely than not existed, involving senior officers in the NRD in Sabah.

This was based on several witness’ testimonies during the RCI hearing held between Jan 14 and Sept 23 last year.

“We can only conclude that it was more likely than not, that ‘Project IC’ did exist, as reflected in the evidence of five witnesses.

“In short, there is a probability that such a project did exist at all material times,” the RCI report stated.

Police investigations, the report continued, however, found that the actions of the NRD officers were “purely for financial gain”, and that they did not pose a threat to national security.

“They (the police) did not seem to find it necessary to go beyond the financial motive and to determine whether there were other motives involved.

“Even if they did, it is doubtful whether the suspects mentioned would have revealed their clandestine involvement given its secretive nature and intentions,
as well as the personalities
involved.”

The report noted that while there was credibility in the five witnesses, none were subjected to cross-examination, as would have been the case in a trial.

The five witnesses were Ramli Kamaruddin (Sabah NRD director from 1992 to 1995), Kee Dzulkifli Kee Abdul Jalil (registration clerk attached to the NRD in Kota Kinabalu in 1994), Asli Sidup (assistant registration officer attached to Sabah’s NRD from 1986 to 1996), Yakop Damsah (former head of the NRD at Tamparuli district in Sabah) and Datuk Abdul Rauf Sani (Sabah NRD director from 1990 to 1992).

All five witnesses were arrested and detained under the now-repealed Internal Security Act in the mid-1990s for alleged involvement in illegally issuing ICs to immigrants in Sabah.

The commission also said there was evidence that immigrants were issued blue ICs illegally by “certain syndicates and individuals”.

The report said all the individuals, with the exception of Megat Junid, who died in 2008, had denied any involvement in the alleged illegal activities to the commission.