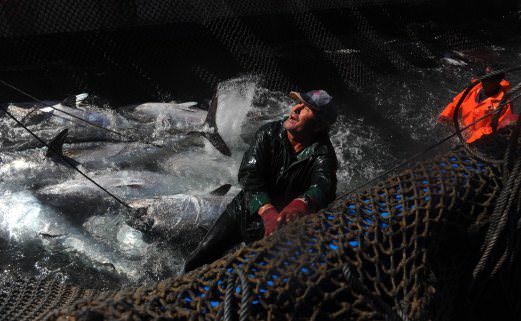 BARBATE, Spain: Spanish fishermen in the Strait of Gibraltar have kept alive a 3,000-year-old netting tradition that brings in tuna so tasty, buyers come for it all the way from Japan.

Silence falls as the fishermen on board their orange and blue boats stop calling out to each other and switch their engines off, to examine the surface of the water.

Four divers jump in. Their mission is to alert the boat crews when the 200-kilo (440-pound) bluefin tuna swim into the nets.

The fishermen wait to trap their prey in an “almadraba“, a system of nets stretched across the water off a beach in Zahara de los Atunes, on the southern tip of Spain.

The tiny resort is named after the tuna that have been caught here in this stretch of water since the Phoenicians ruled the Mediterranean from around 1200 BC.

The tradition survives, despite the threat from overfishing by industrial trawlers. Each year, bluefin tuna swim through the strait from the bitter cold of the Atlantic into the warmer Mediterranean to lay their eggs.

Fishermen lay the almadraba to create a submarine system of chambers that trap the biggest of the migrant fish. At last a diver pulls at the rope and cries out: “Haul it up!” With pulleys they draw the tight mesh up to the surface of the waves, the silver-red scales of dozens of giant tuna fish glittering in the sunshine.

Several men jump into the nets and kill the fish with knives, turning the blue waves red. “We bleed the tuna to stop them suffering and to get the best quality possible,” said Rafael Marquez, a 45-year-old almadraba fisherman.

If the fish feel fear, he says, “they give off a substance that spoils the flesh.” This fish bloodbath has prompted shock and criticism, but the Almadraba Producers’ and Fishermen’s Organisation insists the tradition respects the environment.

“We were the ones who raised the alarm, along with the environmentalists” in the early 2000s about the harm done to tuna stocks by mass trawling, said Marta Crespo, the organisation’s deputy leader.

“If the fishing were done only using almadraba, there would as much tuna in the sea as sand on the beach.” The Spanish biologists’ and naturalists’ association Hombre y Territorio says it considers the almadraba a form of “sustainable fishing.” “Its 3,000-year history shows that the almadraba is sustainable,” said Crespo.

“It is the most ancient fishing art in the West.” An international plan launched in 2006 has saved the bluefin tuna from overfishing for the time being and stocks have recovered, she said.

That led countries to raise quotas for fishing in the Mediterranean and Atlantic this year for the first time since 2007, to about 16,000 tonnes – of which 700 tonnes are for the almadrabas.

At the Frialba factory on the waterfront in Barbate, a dozen employees await, armed with hooks and knives as the boats come back with 60 tonnes of tuna on board.

With swift strokes they slice off a tuna’s head and tail and part it into four huge fillets of deep red, for storing at minus 60 degrees Celsius.

Japanese buyers run from one fish to another, choosing the fillets they want to send back home. Bluefin tuna from the almadrabas is “number one in the world for quality“, says Hori Mi-Zu Yosuke, director of the Japanese tuna company Sirius Ocean.

In the 1980s more than 90 percent of the tuna caught by the three fishing companies in the organisation was sold in Japan.

But now young local companies are selling a bigger share – some 30 percent of the catch – in Spain itself. “Tuna is everything to us, to this area.

It creates lots of jobs,” said Andres Jordan, head of one such company, Gadira. “It is the cream of the ocean.” The wholesale price is about 12 to 14 euros a kilogram (about $7.00 a pound) but the retail customer will pay up to 45 euros per kilo for the prized tuna belly.

When salted and dried, it retails for up to 100 euros ($110) a kilogram. Slicing in the Frialbad factory gives Jesus Cota, 38, an appetite. After work he orders a serving, straight up in the Japanese style. “I love fresh raw tuna,” he says. “It is red gold.” –AFP/ http://www.nst.com.my