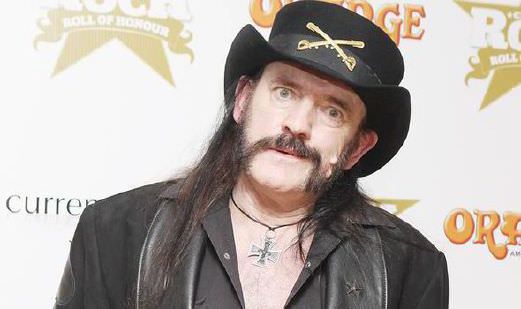 The veteran musician, one of rock and roll’s great survivors despite his hard-partying lifestyle, was diagnosed with cancer on Saturday.

A godfather figure in heavy rock music, he put his longevity down to never taking heroin.

“There is no easy way to say this… our mighty, noble friend Lemmy passed away today after a short battle with an extremely aggressive cancer,” the band said on their official Facebook page.

“He had learnt of the disease on December 26th, and was at home, sitting in front of his favourite video game from The Rainbow… with his family.

“We cannot begin to express our shock and sadness, there aren’t words.” Kilmister lived in Los Angeles and was typically to be found inside the Rainbow Bar and Grill on Sunset Strip, playing a fruit machine.

He is considered a pioneer of heavy metal — though he always insisted Motorhead was a rock and roll band.

Kilmister used an unusually high microphone on stage — a set-up he stuck with from the band’s early days, which he said meant he couldn’t see how few people had turned up to concerts.

“We will say more in the coming days, but for now, please play Motorhead loud, play Hawkwind loud, play Lemmy’s music loud. Have a drink or few. Share stories,” the band said in their statement.

“Celebrate the life this lovely, wonderful man celebrated so vibrantly himself. He would want exactly that. “Born to lose, lived to win.”

His death comes a month after that of Phil “Philthy Animal” Taylor, the band’s former drummer, who was 61.

Kilmister was born in Stoke-on-Trent in central England and grew up on the Welsh island of Anglesey.

He was a roadie for legendary US guitarist Jimi Hendrix and founded Motorhead after being fired from his previous band, Hawkwind.

He will be sadly missed. He was a warrior and a legend.

I will see you on the other side.”

Kilmister’s health had suffered in recent years but the band stayed on the road, playing the Glastonbury festival in June.

At the Classic Rock Awards in London in November, he looked frail and needed assistance walking up and down a small set of steps.

Motorhead were due back on the road in January, with a tour of the Britain and continental Europe.

It was due to begin on January 23 in Newcastle, with dates in Glasgow, Manchester, Swindon, London, Lille, Paris, Barcelona, Madrid, Geneva and Basel. –AFP/nst