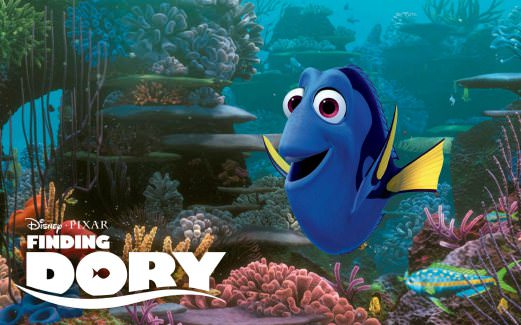 A week after energizing the summer season, Disney/Pixar’s “Finding Dory” declined only 46% and generated the eighth-highest second weekend of all time, edging “Captain America: Civil War.”

It’s also the best second weekend for an animated title. “Finding Dory,” the sequel to 2003’s “Finding Nemo,” is already the sixth-highest domestic grosser of 2016 after ten days with $285.6 million – less than $100 million short of the final total for “Nemo.” Fox’s “Independence Day: Resurgence” finished about 20% below recent forecasts, which had pegged the sequel to match the $50 million opening weekend from the 1996 original.

It edged “Kung Fu Panda 2” as the eighth-largest opening of 2016. “Resurgence” brought back the same fearsome aliens from the original, again bent on destroying the Earth.

Will Smith, who broke out in the original, did not return to battle the invaders although Bill Pullman, Vivica Fox and Jeff Goldblum reprised their characters with newcomers Liam Hemsworth and Jessie Usher coming on board.

Attendees were 58% male with 64% over 25. “Resurgence” generated a B Cinemascore. Roland Emmerich returned to the director’s chair to helm the $165 million tentpole, which will require strong performances from international markets to become profitable.

“Resurgence” took in $102 million from 57 markets in a day-and-date rollout for much of the world. Blake Lively’s shark tale “The Shallows” performed above forecasts with a $16.7 million launch for Sony while Matthew McConaughey’s historical drama “Free State of Jones” started quietly with $7.8 million for STX.

Paul Dergarabedian, senior media analyst with comScore, said that the overall weekend was nearly identical in total box office gross to the same weekend a year ago when “Jurassic World” and “Inside Out” dominated the multiplex.

“The great continued performance by ‘Finding Dory’ bolstered a very mixed set of results for the remaining films in the Top 10,” he noted. “There was good news for one of the newcomers as Sony’s ‘The Shallows’ benefited from great reviews and social media buzz to creep up silently like a shark and surprised everyone with its performance.”

The weekend results underline how dominant Disney has been in 2016 with “Captain America: Civil War,” “The Jungle Book” and “Zootopia” all topping the $340 million mark after “Star Wars: The Force Awakens” generated massive holdover grosses in January.

For its part, Fox generated a surprise smash with “Deadpool” taking in $363 million domestically and solid returns from “X-Men: Apocalypse” – which brought in $2.5 million in its sixth weekend to lift its domestic total to $151 million.

“The Shallows,” which centers on Lively’s bikini-clad character battling for survival in a shark’s feeding ground, generated a B+ Cinemascore and nearly matched its modest $17 million price tag. Sony distribution chief Rory Bruer said the social outreach campaign had been effective.

“We were able to convey that this is a movie that has you on the edge of your seat and is both fun and scary,” he added.

“The Shallows” finished a close fourth behind New Line/Universal’s second weekend of “Central Intelligence,” which declined 48% to $18.4 million.

The Kevin Hart-Dwayne Johnson action-comedy has topped $69 million in 10 days. “Free State of Jones,” starring McConaughey as the leader of a rebellion against the Confederacy, came in fifth and finished below forecasts.

It cost $50 million to make but STX’s exposure is under $10 million. New Line’s third weekend of “The Conjuring 2” grossed $7.7 million to finish in sixth with a total of $86.9 million.

Lionsgate’s third frame of “Now You See Me 2” took in $5.7 million to bring its total to $52.1 million. Broad Green’s release of Amazon’s “Neon Demon,” starring Elle Fanning in a dreamlike fashion world film, generated little traction with $606,574 at 783 locations – a limp $783 per screen avaerage. A24 saw an impressive opening for its offbeat “Swiss Army Men,” starring Daniel Radcliffe, with $114,000 at three sites.