Judge recuses self from Anwar case 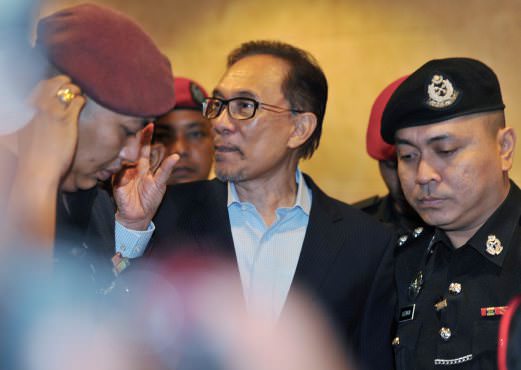 Senior federal counsel Maisarah Johari confirmed that Hanipah made the decision to recuse herself during case management in her chambers today.

Maisarah appeared for the three respondents in the matter; the Sungai Buloh Prison director, the Prison Commissioner-General, and the Home Minister.

Counsel Shahid Adli Kamarudin, who acted for Anwar and his family, said the court had set July 15 for case management to fix a new judge to hear the matter.

On May 18, Anwar, serving a five-year jail sentence at the Sungai Buloh Prison for sodomy, and his family filed the judicial review.

The legal action sought to overturn the refusal of the Sungai Buloh Prison director to permit physical contact between them during visits.

The judicial review specifically targeted the director’s refusal, which was contained in a letter dated March 14, sent to Anwar’s lawyers.

Anwar and his family claimed they had suffered and incurred hardship from the denial of physical contact, which they described as unreasonable and unlawful, among others. Besides Anwar, 68, the other applicants are his wife Datuk Seri Dr Wan Azizah Wan Ismail, 63; his daughters Nurul Izzah, 35; Nurul Nuha, 32; Nurul Ilham, 28, and Nurul Iman, 25, and the couple’s four grandchildren.-nst