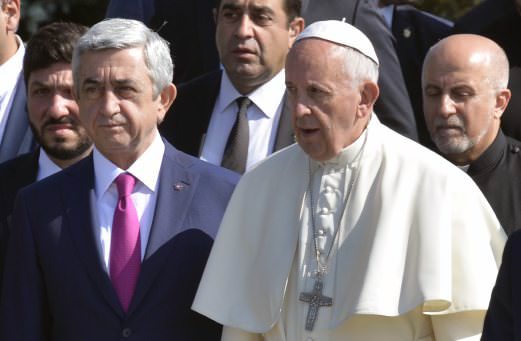 YEREVAN: A sombre Pope Francis, “with pain in my heart,” paid tribute on Saturday to the 1.5 million Armenians massacred in 1915, an event which he has labelled a genocide, risking Turkey’s ire.

Francis, on the second day of his trip to Armenia, made an early morning stop at the Tzitzernakaberd, the “Genocide Memorial and Museum,” a towering granite needle flanked by an eternal flame on a hillside overlooking the Armenian capital.

There, visibly moved, he took part in a prayer service along with President Serzh Sarksyan and leaders of the Armenian Apostolic Church.

“Here I pray, with pain in my heart, so that never again will there be tragedies like this, so that humanity does not forget and knows how to overcome evil with good,” he wrote in the guest book in Italian.

On Friday night in a speech to the president, the government and diplomats, Francis departed from his prepared text to use the word “genocide,” a description that infuriated Turkey when he said it a year ago.

As of Saturday morning there was no official reaction from Turkey, which last year recalled its ambassador to the Vatican after the pope used the ‘genocide’ term.

The envoy was kept away for 10 months. Turkey accepts many Christian Armenians living in the Ottoman Empire were killed in clashes with Ottoman forces during World War One, but contests the figures and denies the killings were systematically orchestrated and constitute a genocide. It also says many Muslim Turks perished at that time.

“There is no reason not to use this word in this case,” Vatican spokesman Father Federico Lombardi told reporters on Friday night.

“The reality is clear and we never denied what the reality is.” At the Saturday morning ceremony, Francis chatted with descendants of Armenian orphans who were sheltered at the papal summer residence south of Rome at the start of the 20th century.

“May God grant the beloved Armenian people and the entire world peace and consolation. May God protect the memory of the Armenian people. Memory should not be diluted or forgotten. Memory is a source of peace and the future,” he wrote in the guest book.

After the memorial service the pope flew to say a Mass in the provincial city of Gyumri, near the border with Turkey and within sight of Mount Ararat, where the Bible says Noah’s Ark landed after the Great Flood.