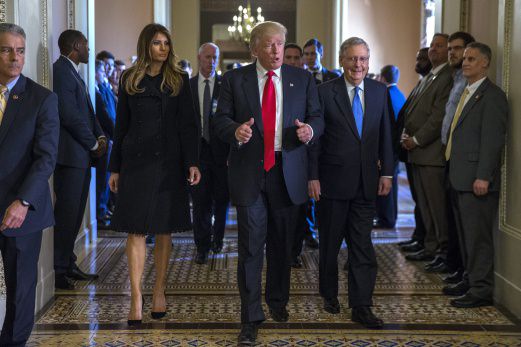 WASHINGTON: Donald Trump sought to turn over a new leaf with Republican leadership as he visited Congress Thursday after an acrimonious campaign, but the president-elect could find himself at odds with lawmakers from the start on key issues.

Trump managed a stunning victory over Democrat Hillary Clinton in an election in which his hot rhetoric and pie-in-the-sky promises were the norm, but he will now need to operate within an institutional system where his legislative priorities need green lights from both chambers of Congress.

Trump’s path may be easier than expected when he takes office in January because his Republicans were able to maintain their majorities in both the House and the Senate, giving the GOP full control of Congress and the White House for the first time since 2006.

After Thursday’s meeting at the White House with President Barack Obama, Trump held closed-door talks with House Speaker Paul Ryan in what many saw as a fence-mending mission after the two clashed bitterly in recent months and Ryan refused to campaign with the nominee. But Ryan appeared friendly and gracious as they met, first over lunch and then in his Capitol office.

Trump said he and the Republican majority were going to accomplish “absolutely spectacular things for the American people.” But Senate Majority Leader Mitch McConnell was already throwing cold water on some of the priorities in Trump’s plan for his first 100 days in office.

“I think it’s always a mistake to misread your mandate,” McConnell warned on Wednesday, pointing to the president’s rush to pass Obamacare and other controversial legislation while his Democrats controlled both chambers of Congress, only to lose that majority. Trump will also have to tread lightly if he wants broad support.

Several Republicans including a handful in the Senate openly opposed his presidential bid. Trump and his incoming vice president Mike Pence met for an hour with McConnell on Thursday, and Trump highlighted three priorities for his new administration.

Trump made building a border wall between the United States and Mexico and repealing Obamacare pillars of his presidential campaign. McConnell has signaled interest in at least one of those.

“It’s a pretty high item on our agenda,” McConnell said of Obamacare Wednesday. “I would be shocked if we didn’t move forward to keep our commitment to the American people.”

But McConnell did not mention the border wall, offering only that he wants “to achieve border security in whatever way is the most effective.”

Ryan, in an interview Thursday with Fox News, said border security was a priority, but “I will defer to the experts on the border as to what is the right way to actually secure the border.”

The incoming president and congressional Republicans are equally thrilled that Trump, and not Clinton, will be filling a vacancy on the US Supreme Court.

And they will likely back him on his push for lowering taxes, strengthening the military and tearing up several of Obama’s executive orders on issues from immigration to energy and environmental regulations.

They may not be as thrilled with Trump’s call for expanding infrastructure development, a longstanding Democratic priority.

There is already tension about Trump’s foreign policy pronouncements, including his openly questioning the role of the North Atlantic Treaty Organization.

“I will say for myself the NATO alliance is every bit as important today as it ever was,” McConnell said.

Trump’s apparent coziness with Russia and his stated admiration for President Vladimir Putin will not sit well with Republicans who see the Kremlin as a longstanding adversary.

And McConnell bluntly shot down Trump’s call to implement term limits in Congress, saying they “will not be on the agenda” in the Senate.

“I would say we have term limits now. They’re called elections.”

McConnell said such differences between Trump and congressional leaders were manageable and should be hashed out in private, not in the media glare.

Senator Bernie Sanders, who challenged Clinton for the Democratic nomination early this year, made it clear a President Trump would have to steer a steady course if he was to expect cooperation from liberals in Congress.

“If Donald Trump takes people’s anger and turns it against Muslims, Hispanics, African Americans and women,” Sanders tweeted, “we will be his worst nightmare.”