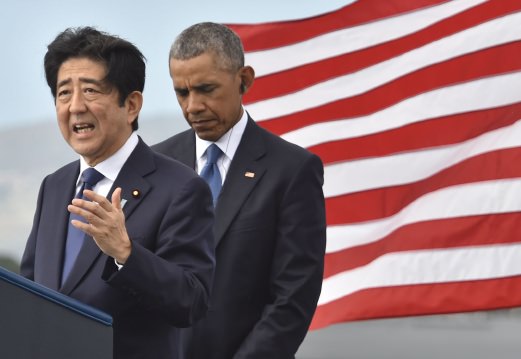 PEARL HARBOR: The leaders of war-time enemies America and Japan made a poignant joint pilgrimage to Pearl Harbor Tuesday, issuing symbolic declarations about the power of reconciliation and warning against the drumbeat of conflict.

The pair paid homage to the more than 2,400 Americans killed on December 7, 1941, delivering a wreath of peace lilies and standing in silence before a shrine to those lost on the USS Arizona – roughly half of all those killed.

Abe’s visit is a high-profile mark of contrition by a leader for whom Japan’s wartime past is often a sensitive domestic issue.

“We must never repeat the horrors of war,” he said. “What has bonded us together is the power of reconciliation, made possible through the spirit of tolerance.” Obama – who last May made his own solemn pilgrimage to Hiroshima, the target of a US nuclear bomb that effectively ended the war – issued his own remarks that rang with history and America’s current hypercharged politics.

“I welcome you here in the spirit of friendship,” he told Abe. “I hope that, together, we send a message to the world that there is more to be won in peace than in war, that reconciliation carries more rewards than retribution.”

“Even when hatred burns hottest, even when the tug of tribalism is at its most primal, we must resist the urge to turn inward,” Obama said against the backdrop of the USS Arizona.

“We must resist the urge to demonise those who are different.” The meeting between the two leaders comes as Obama prepares to leave office and with Abe leading Japan into uncharted waters after remarks by incoming US president Donald Trump clouded US-Japanese relations.

Trump, who takes office on January 20, appeared during his campaign to suggest Japan break a taboo and develop its own nuclear weapons. He caused consternation again last week when he blithely threatened to revive the global nuclear arms race.

The US president-elect has also declared his opposition to the Trans-Pacific Partnership, effectively killing a major trade deal that Obama championed and Abe put at the heart of his economic strategy.

And – on the campaign trail at least – Trump has also called into question the US security guarantees that shielded Japan through the Cold War and later the rise of an increasingly confident China.

What he will do in office is unknown. Abe’s visit to Pearl Harbor was not the first by a Japanese prime minister. Shigeru Yoshida made a stopover in Hawaii in 1951 and visited the National Memorial Cemetery of the Pacific, or Punchbowl, during his visit.

But there is no record showing that he paid his respects to the victims at the harbor. In 1956, then-prime minister Ichiro Hatoyama visited the headquarters of the United States Pacific Command in Honolulu, which fronts Pearl Harbor.

And Abe’s grandfather, prime minister Nobusuke Kishi, did the same in 1957. But Abe’s visit – the first by a sitting prime minister to the USS Arizona Memorial, built in the early 1960s – may prove the most significant.

In an emotive speech on the waterfront, he imagined the long-silent voices of American victims chatting about their futures and their dreams, praying for as-yet unborn children before the carnage. “All of that was brought to an end,” he said in his native Japanese.

“When I contemplate that solemn reality, I am rendered entirely speechless.” In 1941, the legendary Admiral Isoroku Yamamoto maneuvered six aircraft carriers to within 240 miles (385 kilometers) of Oahu and unleashed two waves of dive bombers. The US Pacific fleet, formerly Japan’s main rival in the region, lost 21 warships and 328 planes.

Hundreds of sailors drowned when the USS Oklahoma, still lashed to the quay, pitched onto its side and trapped them. Before the attack, the US isolationist campaign’s cry of “America first!” – now revived as Trump’s slogan – found a ready ear among voters wary of embroilment in Europe.

“Here in so many ways, America came of age.” Three quarters of a century on, he added, the alliance between the United States and Japan “has never been stronger.”

“It has helped underwrite an international order that has prevented another world war and that has lifted more than a billion people out of extreme poverty.”

Only five of the Arizona’s crewmen are still alive and, while the memorial remains a tourist draw, in Hawaii, Obama’s home state, the divisions of war have given way to a shared present.

“I don’t think there is any feeling of antipathy toward the Japanese 75 years after the attack.”