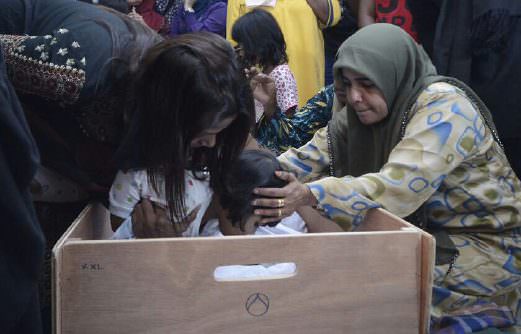 GEORGE TOWN: The remains of the driver of the crashed Alisan Golden Coach Express bus and his young daughter were laid to rest amidst a grim atmosphere here early today.

Tears were flowing freely as family members of Zakeer Zubir, 32, and Nur Natasya Zahara, 1, bid their final farewell to the father and daughter who perished in Pagoh, Johor, yesterday.

Relatives and friends wept incessantly when the bodies arrived at the Masjid Jamek Hashim Yahaya in Jalan Perak here at about 4.45am.

A heart-wrenching atmosphere enveloped the funeral as family members caressed and kissed the two bodies, which had been placed in two caskets.

It was also a moment of heartbreak when the surviving eldest child of Zakeer, Nur Cahaya Zulaikha, 4, kissed the foreheads of her late father and sister prior to the funerary rites and Subuh prayers.

The funeral was completed when the bodies were buried at the Hashim Yahaya Muslim cemetery grounds at about 6am.

The two were killed when the bus driven by Zubir plunged into a ditch at Km137.7 on the PLUS Expressway at Pagoh at 3.45am yesterday.

Twelve other occupants were killed, while 16 others were injured. The injured include Zakeer’s Indonesian wife, Miyarseh.

It was reported that Zakeer had only joined the bus company, Goldstar Express (M) Sdn Bhd, a month ago.

Following the crash, the Land Public Transport Commission (SPAD) suspended the operator’s license and its entire fleet with immediate effect.-nst