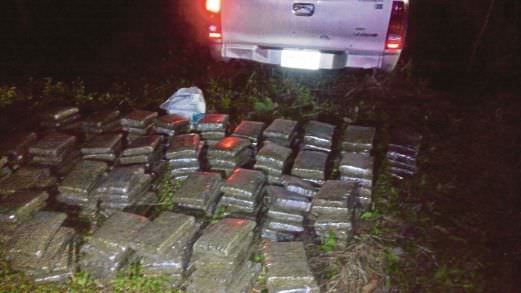 ALOR STAR: What started as a routine crime patrol inspection by two policemen in Arau yesterday turned into a gunfight with an alleged drug trafficker, followed by a high-speed car chase which ended with the officers foiling an attempt to smuggle more than half a million ringgit worth of cannabis into this country.

The 7.30pm drama unfolded when two policemen attached to the Arau police headquarters flagged down a Toyota Hilux at Jalan Kampung Rambai, Guar Nangka, here after sensing the driver was behaving suspiciously.

One of the two policemen in the patrol car approached the pick-up truck and removed its ignition key before proceeding with routine checks.

A source told The New Straits Times that as the policeman moved on to inspect the rear of the vehicle, its driver got into a scuffle with the other officer.

“The first policeman rushed to the driver’s seat to provide assistance to his partner, but the driver managed to break free and fired several shots at them while restarting the pick-up truck and speeding off.

“The two policemen returned fire, hitting the pick-up truck’s front and rear wheels, but the driver continued on, prompting the duo to give chase,” said the source.

It is learnt that the driver had used a spare ignition key to restart the vehicle.

Thirty minutes into the chase, the alleged drug trafficker finally lost control of the vehicle after passing a traffic light junction at Titi Kerbau, Changlun, and crashed the pick-up truck along the Kuala Perlis-Changlun trunk road.

The man, who survived the crash, jumped out of the vehicle before disappearing in a nearby rubber estate.

Checks later revealed that the suspect was transporting 174 compressed ganja slabs with a street value of RM522,000 in the rear bucket compartment.-nst