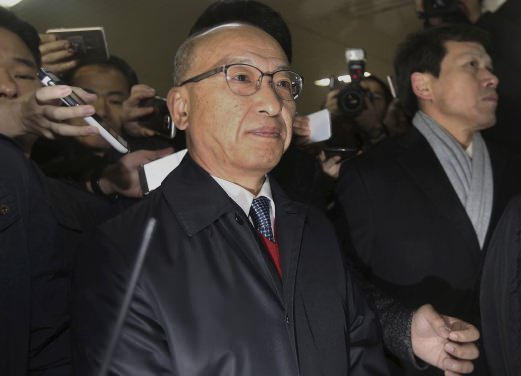 As part of an ongoing corruption scandal, Park is accused of colluding with long-time confidant Choi Soon-Sil to strong-arm companies like Samsung into handing over tens of millions of dollars to dubious foundations which Choi controlled.

During investigations, former health minister Moon Hyung-Pyo — now National Pension Service (NPS) chief — has been accused of pressuring the state pension fund to back a controversial merger of two Samsung units when he served in the health ministry.

He has denied all allegations but was detained after a key NPS official told investigators he was pressured by the health ministry to vote for the merger, Yonhap news agency said.

“Moon was taken into emergency detention early this morning”, the spokesman of the Special Prosecutor’s Office told journalists. Investigators now have to decide whether to formally arrest Moon before the emergency detention period expires in 48 hours.

Parliament voted to impeach Park Geun-Hye on December 9, accusing her of constitutional and criminal violations ranging from a failure to protect people’s lives to bribery and abuse of power.

The case is now being considered by the Constitutional Court which was given 180 days to rule on the validity of the impeachment.

The merger of Samsung units Cheil Industries and Samsung C&T was seen as a crucial step to ensure a smooth father-to-son power transfer to Lee Jae-Yong, scion of Samsung’s founding family.

Critics said it undervalued Samsung C&T stock but the NPS — the world’s third largest public pension fund and a major Samsung shareholder — voted in favour of the deal, allegedly incurring hundreds of millions of dollars of loss for NPS subscribers.

During the impeachment hearing, the court also ordered Park’s attorneys to clarify the president’s whereabouts after the disastrous Sewol ferry sinking in 2014 before her first appearance at an official meeting to discuss the government’s response.

She was taken to task for her alleged failure to respond promptly to the tragedy that claimed 304 lives, mostly students.

Unconfirmed media reports have suggested a range of theories about her activities, including cosmetic surgery and a haircut.

Investigators on Wednesday raided the Seoul National University Hospital, a plastic surgery clinic and another hospital suspected of carrying out cosmetic surgery treatments on Park.