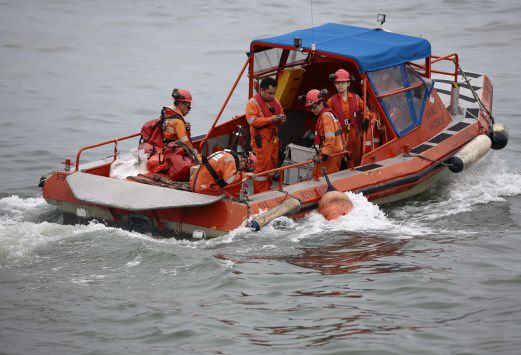 JOHOR BARU: Fishermen at six villages near the Pasir Gudang Port might suffer losses amounting to RM130,000 due to an oil spill following the collision of two container vessels on Tuesday.

“When I visited the area, work to clean the oil spills was in progress… but there were still traces of oil on the sea surface which could have adverse effects on fishing equipment.

“So, I’m not sure whether they (fishermen) can go out to sea or not,” he told reporters after checking a 10-kilometre stretch affected by the oil spill here yesterday.

Azli said the association is now waiting for a full report from its affected members before any action, including demanding compensation, is taken. Meanwhile, a Johor Environment Department spokesperson said the cleaning up operation using vacuum suction of the oil spill has begun.

“This operation is carried out carefully… if it’s done in a hurry, it may break up the oil patches and (for that,) we cannot clean it up thoroughly.

We also cannot tell how much longer the operation will take,” said the spokesperson when contacted by Bernama here.

It is learnt that the spilled oil was identified as Marine Fuel Oil (MFO) 500 CST, which is used in the shipping industry.

He said the assessment report will be issued by the Malaysian Fisheries Development Board (LKIM) to determine the exact amount of losses incurred by the fishermen.

Meanwhile, an LKIM spokesperson said the affected fishermen could submit a memorandum containing their names, which would be sent to the relevant parties for insurance claims.

“The amount of losses incurred will be assessed by the parties involved and if there are no problems, the payment will be made directly to the affected fishermen,” said the spokesperson.

In the 11.01pm incident, a Singapore-registered vessel, Wan Hai 301, was entering the port at about 11pm when it rammed the bunker tank of an anchored Gibraltar-registered APL Denver vessel.

Wan Hai 301 is believed to have suffered a technical failure before the collision. It was reported that some oil patches were spotted off the western side of Pulau Ubin in Singapore. – Bernama