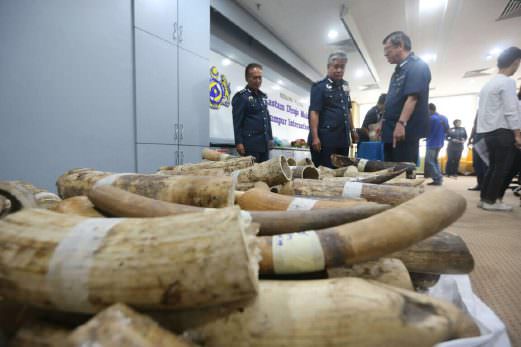 SEPANG: The Royal Malaysian Customs Department at the Kuala Lumpur International Airport (KLIA) has seized 254 units of ivory worth RM7.2mil, believed to have been smuggled in from the Democratic Republic of Congo.

Displaying the large seizure at a press conference in the Kompleks Kastam Kargo KLIA, Datuk Hamzah Sundang, the director of KLIA Customs, said the department acted on a tip-off from an informer.

“We processed the information that we’ve received and sent our officers to investigate.

“To our surprise, we discovered the ivory, packed in 17 boxes from DR Congo in the air cargo warehouse of the free-trade zone in KLIA.

They were delivered via MAS Cargo,” said Hamzah. According to him, the cargo was flown in via Turkish Airline and

The smuggled goods weighing 846.2kg were labelled as “wood samples” on the boxes.

They were supposed to be delivered to an unidentified recipient at a home address in Cheras, Selangor.

Hamzah revealed that the smugglers have used forged documents and that the address in Cheras did not exist but Malaysia is definitely their final destination.

The department has pledged a handsome cash reward for those with valuable information on this case.

In Malaysia, the import of ivory requires a special permit from the Wildlife and National Parks Department (Perhilitan) Under Section 135 (1) (a) of the Customs Act 1967, and those found guilty of illegally importing ivory into the country can be fined a maximum of 20 times the value of the smuggled items, or face three yearsimprisonment, or both.

As of December 2016, Malaysia has recorded nine cases of smuggled ivory, totalling to RM10.9mil. Hamzah stated that the figures have gone up by RM8.6mil, or three more cases, as compared to 2015.-nst