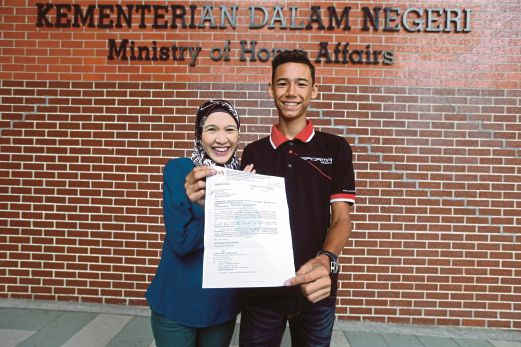 PUTRAJAYA: AFTER years of having to go back and forth to the National Registration Department (NRD), German-born cyclist Mohd Justin Felix Nagel’s dream of becoming a Malaysian citizen has finally come true.

Yesterday, the once stateless 15-year-old together with his mother, Hasni Samsudin, 33, and his coach, Mohd Firdaus Daud, received the good news at the Home Ministry’s National Registration and Societies Division here.

They arrived at 2.30pm to collect the citizenship application status letter approved by the ministry.

Hasni told the New Straits Times that she was overjoyed that her son could now visit places and take part in cycling competitions.

“Now that Justin will have a MyKad, he can apply for a place at his school’s hostel and is entitled to benefits like his friends.”

Justin said he could now focus on his studies and training without having to worry about his citizenship status.

“I will train hard so that I can pursue my dream of representing the country in cycling competitions — locally and internationally.

“I thank my parents, my coaches, the Youth and Sports Ministry, Johor Sports Council, the NST and everyone who had helped me throughout this process. Thank you for the endless support and believing in me.”

Firdaus said the next step would be for Justin to apply for a MyKad.

He said the Johor Sports Council’s high-performance sports unit would meet the Education Ministry for an update on Justin’s status and reprocess his entry into SMK Dato Sri Amar Di Raja’s hostel in Muar, Johor.

“I am proud and satisfied with the positive outcome today (yesterday), as it will be easier for me to make plans for his cycling activities,” Firdaus said.

“If everything goes well, we plan to send him to Europe probably in June or July for a development programme in which he will be able to join training and enter competitions there.”

Justin’s plight was first highlighted by the NST on June 3 last year where Hasni recounted problems she faced in trying to obtain citizenship for Justin since 2009.

Justin was born in Itzehoe, Germany, to a German father, Kai Nagel, and Hasni, a Malaysian.

They were divorced in 2006. Justin has a younger brother, Joshua Adam, 11, who was born in Kuala Lumpur, and has no citizenship issues.

Complications arose from the family’s first attempt to gain his citizenship in 2009, which hit a stumbling block when Kai had initially declined to travel to Malaysia to sort out the cessation of Justin’s German citizenship.

Kai, however, did come to Malaysia last August after which Hasni said he agreed to Justin becoming a Malaysian citizen.

While his applications for citizenship since 2009 hung in the balance, Justin’s German passport expired in 2013.

He refused to renew the document to push through with his application for Malaysian citizenship.

Following an application supported by Youth and Sports Minister Khairy Jamaluddin and the Home Minister’s Office, Hasni and Justin were called for an interview with NRD in September last year, after which they were told that his application was being processed.-nst