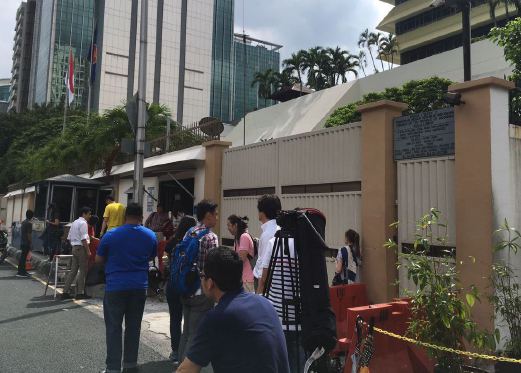 KUALA LUMPUR: Members of the media who arrived at the Indonesian embassy for a press conference were left puzzled when only Indonesian pressmen were allowed to enter.

Local and foreign press members, who had been informed of an “emergency” press conference at the embassy, were forced to wait for an hour and a half to glean information from their Indonesian counterparts once the briefing was over.

But the Indonesians kept mum when asked for details of the conference.

“Sorry, we can’t. We are not allowed to say anything. We are very sorry,” said Indonesia’s TV One news reporters. The embassy was also tight-lipped on the meeting.

“The ambassador will not be meeting other press. This is only for the Indonesians,” said the receptionist at the embassy.

This morning, Indonesia’s deputy ambassador to Malaysia, Andreano Erwin, was allowed to meet the Indonesian suspect in the murder of Kim Jong-nam for half an hour at the lockup at Cyberjaya police station.

He had said that the suspect, Siti Aisyah, claimed that she was hired by two men to carry out a prank on the North Korean.

She claimed that she was paid RM400 to carry out the prank and that she did not know that the liquid used was toxic.

On Feb 13, Jong-nam, who is the half-brother of North Korean leader Kim Jong-un, was attacked at the Kuala Lumpur International Airport 2 (klia2) while waiting for a flight to Macau.

He died en route to the Putrajaya Hospital.