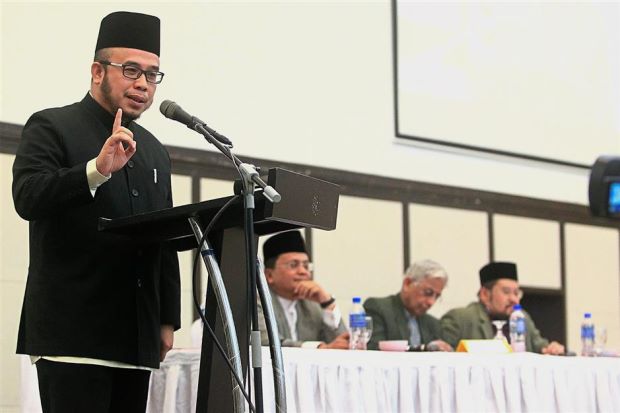 “Gossiping is a big sin in Islam but are there (syariah) laws against gossiping? Do you see the religious authorities sending officers out to haul up those who gossip?’’

He points out that while some things are haram (forbidden) and sinful in Islam, that does not mean that Allah demands for all of these to be punished in a court of law.

In the case of adultery, for example, he says, if there are only three witnesses of good character present and not four as required by the religion, the adulterer would have to be let off.

“Not all sins have to hauled up to court. The religion doesn’t ask us to go and check up on people, from room to room or car to car, asking for their surat nikah (marriage licence) to find out if they are married or not.’’

Citing another example, he says, a powerful and rich person who commits a crime might be able to afford a good lawyer who cleverly argues the case and gets it thrown out of court.

“Muslims believe we will be tried for all our sins. Drinking alcohol, adultery, stealing are all sins. When we die, we will have to face God and answer for whatever we did. There is no escape.’’

Dr Asri was speaking at the “How Much Do you Know About Hudud” forum organised by Angkatan Merdeka Malaysia.

Touching on PAS president Datuk Seri Dr Hadi Awang’s motion before Parliament for the amendments to the Syariah Courts (Criminal Jurisdiction ) Act 355 (popularly referred to as RUU355), Dr Asri said there are concerns it is all part of a political game.

Dr Asri stresses that while the Quran and Sunnah (tradition of the Holy Prophet) are divine, the interpretations are not.

He points out that while hudud (Islamic Penal Code) is mentioned in the Quran and Sunnah, it is not spelt out in great detail with regards to the context and conditions.

So it was left to scholars to deliberate on these.

“Scholars do not always agree so they have different interpretations of things. So which interpretation should you favour? These are not divine.’’

On RUU355, Dr Asri says, the politicians supporting it keep saying it is not the hudud.

“If it is not hudud, then surely we Muslims are allowed to criticise and give our views. So why is it that whoever criticises RUU355 is labelled as going against Islam? How is it that if you oppose the amendments you are said to oppose Allah’s Laws?

Dr Asri says even within the country, there are differences from state to state in the way Islamic matters, including polygamy, is dealt with, “so we must be very careful about calling something ‘Allah’s Law’.’’

For him, discussion and debate are essential when looking into the dimension of punishment, because it is not only about implementation but also the conditions, the context, and suitability.

He points out that in the Quran, there is a verse, Surah Al Anfal, which talks about the spoils of war and how they should be distributed, with fighters entitled to their share of them too. But he points out that this is not implemented today, because even though it is in the Quran, the wars of today are different from those in the early days; and soldiers now are paid salaries and allowances.

“Defending the country is jihad (a noble struggle) but we don’t hear any political party in the country asking for a spoils of war law to be implemented because the context in today’s world is different.’’

In a jibe at PAS, he says, “tens of years ago’’ they used to label other Muslims who were not with them as “infidels’’, they described the Federal Constitution as a “Jahiliyah” Constitution (Constitution of Ignorance) and warned Muslims against wishing non-Muslims during their religious festivals because for them that was tantamount to leaving the Muslim faith.

But, he says, PAS has backpedalled now on what it said previously and today it says it upholds the Federal Constitution.

“Allah’s Law should never be politicised. It is difficult when political parties come in and play a role in what they deem is Islamic law.

“When religion is politicised, the discussion is no longer fresh and not the sort that can stimulate rational thinking and a healthy discourse.’’

Dr Asri questions: Why do Muslims have a mentality that says, in order to be Islamic the hand of someone who steals has to be amputated?

This kind of mentality is wrong, he says, adding that these kinds of Muslims understand Islam in a closed-off, secluded and non-holistic manner.

“It is like the IS (Islamic State) mentality, where they think of only punishing and not about developing the place.’’

For him, it is wrong to give the world the impression that justice in a Muslim country is served “when we cut off the hands of those who steal, whip those who commit adultery and punish those who drink alcohol’’ and that “this is what showcases the beauty of Islam’’.

Dr Asri says Islam is all about better welfare for the people, spiritual development, strengthening family bonds, and ensuring peace and harmony in society.

And he points out that the Government has already taken action to do a number of these, such as building schools and universities and giving people an education, which is something sought by the religion.

He says there are many things which could have been brought before Parliament, such as how to inculcate the beauty and mercy of Islam into education and the economy.

“But in tens of years in parliament, they (PAS) never even brought these up and focused instead on labelling other Muslims infidels, and having two imams during prayers (because they refused to be led in prayers by an Umno imam).”

He points out that Muslim countries with renowned scholars such as Egypt, Kuwait and Qatar have never discussed implementing hudud, and countries like Pakistan, Sudan and Nigeria that tried to implement it have stopped, because in today’s world, people and conditions are different.

He also says that in Islam there should never be double standards in implementing a law.

He questions what such a thing would do to the fabric of society and the image of Islam.

Dr Asri says if a Muslim faces amputation for a theft and non-Muslims do not, that would not help create harmony and peace within society because there are two sets of laws for the same crime.

He fears if such laws are enacted and implemented in an unjust manner, it will cause Muslims to leave the faith.

“There are many other issues that we should be looking into, such as the issue of good governance, the environment and corruption. We should also be looking at issues that help women, such as expediting divorce cases, because there are a number of cases where women in the midst of getting a divorce are left hanging for years without their cases being resolved. I think all these matters should be sorted out first otherwise people will feel that Islam is unjust to women.

“For me, if the amendments to RUU355 are not going to result in good, let us postpone them and focus on our priorities,”.-thestar