PKR declares support for Pas’ hudud-linked bill to be tabled, debated in Parliament 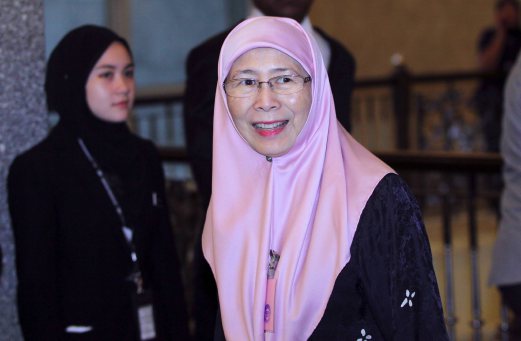 KUALA LUMPUR: PKR has expressed its support for Pas’s controversial hudud-linked private member’s bill to be tabled and debated in parliament.

Dr Wan Azizah however admitted that PKR maintained its reservations on ways to improve the syariah courts, and would await Hadi’s explanation during the tabling of the bill before reaching a final stand on the matter.

The Private Member’s Bill to amend the Syariah Courts (Criminal Jurisdiction) Act 1965, or Act 355 was moved by Hadi on May 26 last year.

“Despite having concerns and reservations concerning Act 355 as proposed by the Marang MP, we accept and recognise his right to submit the bill through a motion seeking approval to be debated.

“In the event of a debate on the motion, and before we move on to make the next decision (on PKR’s stand), we will wait for Hadi explanations,” said Dr Wan Azizah in a statement.

She also called for Prime Minister Datuk Seri Najib Razak’s guarantee that rights under the Constitution would be protected.

“We want to hear the prime minister’s stand on the matter and all that all rights under the Constitution will be protected.

“We would also like to know the reason why bill was deliberately left floating in Parliament when according to the Dewan Rakyat’s regulations, the Government has the powers to decide whether a bill will be debated.”

The proposed amendment aims at improving the syariah court’s jurisdiction in meting out penalties for takzir offences, which are currently limited to the maximum punishment of three years’ imprisonment, or RM5,000 fine, or six strokes of the rotan.

Takzir offences – khalwat and not fasting during Ramadhan among others -differ from hudud or qisas, both of which relate to crimes such as murder and theft.

Act 355 was last amended in 1984, when the punishment was raised from only six months’ imprisonment and RM1,000 fine.