Plane with five aboard crashes into Melbourne mall 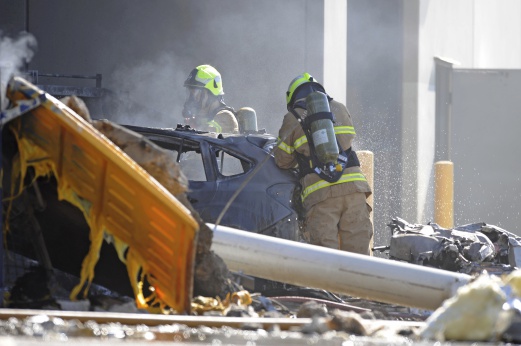 MELBOURNE: A light aircraft carrying five people crashed Tuesday in a “massive fireball”, hitting a shopping centre near the Australian city of Melbourne and sending black smoke billowing into the air, witnesses and officials said.

The Beechcraft plane veered just after take-off into the shopping centre, which had yet to open, next to Essendon airport. “It’s too early to know whether there has been fatalities,” Victoria state police minister Lisa Neville told reporters.

“But it appears to be a very, very tragic accident that has occurred out there.”

She could not provide any casualty figures but confirmed five people were on board the private charter from Essendon, north of Melbourne, en route to King Island, 55 minutes to the south.

Live television footage showed burned-out wreckage, flames and major damage at the shopping centre and adjacent buildings. A column of thick black smoke rose into the air as witnesses spoke of explosions.

“It appears a light plane, which is a charter flight, has impacted the DFO (Direct Factory Outlet) at Essendon Fields,” Neville added. A taxi driver called ABC radio and told of a “massive fireball”.

“I saw this plane … when it hit the building there was a massive fireball,” said the man who identified himself as Jason.

“I could feel the heat through the window of the taxi, and then a wheel – it looked like a plane wheel – bounced on the road and hit the front of the taxi as we were driving along.”

The flight made a May-Day call before crashing, he added. A major freeway which runs alongside the local airport to was shut to allow wreckage to be cleared.