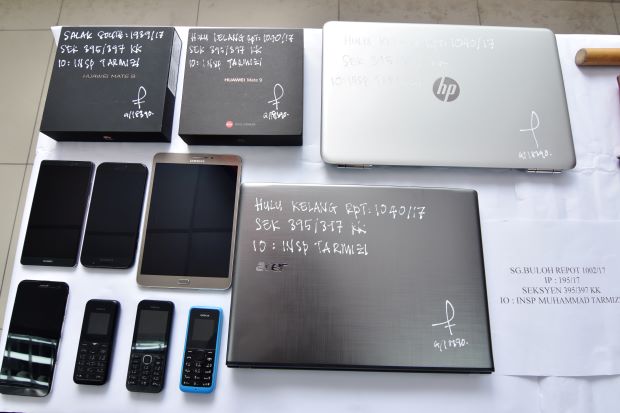 SUNGAI BULOH: A gang of six robbers targeted branches of an electrical goods company only on Sundays for a couple of months, making off with over RM236,000.

However, police pulled the plug on the group, which they called the “Seng Heng Gang”, when all but the mastermind was nabbed in a series of raids in Kuala Lumpur.

“The branches in Sungai Buloh, Nilai, Rawang and Subang Jaya were hit, with the robbers carting away cash and electrical items,” he told a press conference at the district police headquarters here Monday.

He added that the group only robbed the stores on Sundays because the mastermind, who is still at large, used to work in the company and knew the cash collection schedule.

“The five gang members were picked up at various locations around Kuala Lumpur on March 5.

“We also seized various items used by the gang, including a knife and a car with fake licence plates and recovered various electrical appliances,” said Supt Wan Kamarul Azran.

All of the suspects had drug and theft-related records.

Police are looking for one Mohd Yushezry Yusop, 34, to help in the investigations. Anyone with information on him have been urged to contact police immediately.-thestar