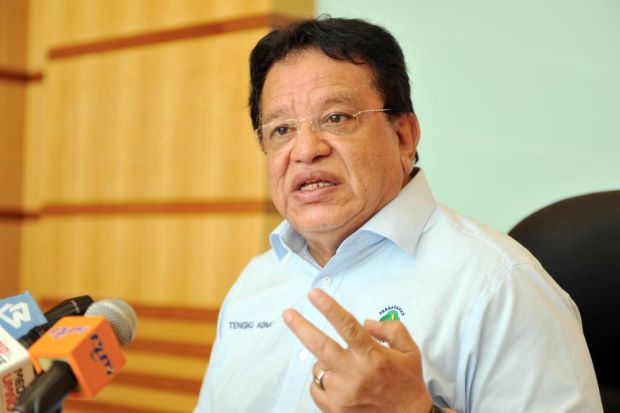 HIGH rainfall density and conditions of the drains are among the main causes for flash floods in Kuala Lumpur. The other reasons include insufficient and blocked outlet pipes from the road to the drains, says Federal Territories Minister Datuk Seri Tengku Adnan Tengku Mansor.

He noted that the rainfall reading in Lebuh Pasar during the massive flash floods on Tuesday was 50mm.

“The drains in Kuala Lumpur were originally designed to accommodate a rainfall density of 50mm but due to time and the situation, the capacity to cope has dropped as some of the drains were old,” he said in reply to Nurul Izzah Anwar (PKR-Lembah Pantai) during question time.

Nurul Izzah had asked for the reasons for the flash floods that caused traffic along several major roads in Kuala Lumpur and Petaling Jaya to come to a standstill that evening.

Tengku Adnan said some outlet pipes were blocked by sand and rubbish, preventing a smooth channelling of the flood waters.

He also said the Kuala Lumpur City Council (DBKL) identified water pools that usually occurred during heavy rains and had come up with a plan to overcome these.

“For locations such as Jalan Ampang and Jalan Sultan Ismail, the plans to upgrade the drains will be done soon as the contractors have been appointed.

“As for the flash flood in Pantai Baru, the tender process for the upgrading work to the retention pond at Universiti Malaya is being done,” said Tengku Adnan. “The upgrading work for other locations is in the documentation process,” he said.

Tengku Adnan added that the retention pond in Universiti Malaya needed to be upgraded as it could no longer contain water when there was a heavy downpour.

DBKL, he said, had discussed with UM to help deepen and upgrade the pond.

The Putrajaya MP said Kuala Lumpur was a developing city and as such, flash floods sometimes occurred in areas where upgrading work had not been done or completed.

“So, please give DBKL a chance,” he said.

One of the worst-affected areas was the junction between Sprint Highway and Jalan Dato Abu Bakar in Petaling Jaya.

The water rose to about a metre. Several cars passing the underpass were trapped and submerged.-thestar