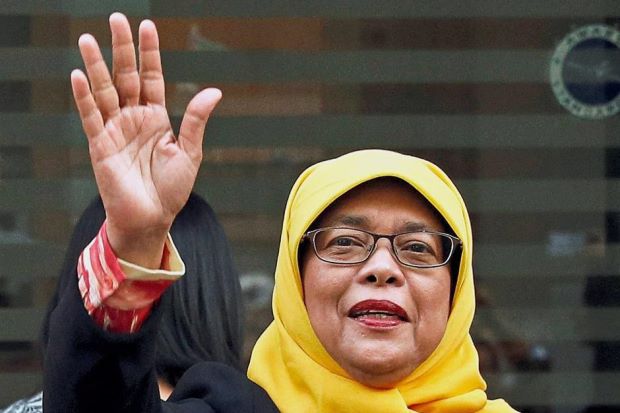 SINGAPORE: Halimah Yacob (pic) is set to be Singapore’s next President, with the first presidential election reserved for candidates from the Malay community headed for a walkover.

The 63-year-old former Speaker of Parliament was the only presidential hopeful to be issued a certificate of eligibility by the Presidential Elections Committee.

Marine services firm chairman Farid Khan, 61, and property company chief executive Salleh Marican, 67, have been informed they did not qualify to contest the election.

This means Halimah will be declared the country’s eighth president shortly after nominations close at noon on Wednesday.

Salleh’s and Farid’s bids had been uncertain because neither man helmed a company with S$500mil (RM1.5bil) in shareholder equity for the most recent three years, a condition set out in the Constitution following amendments passed last year.

No more certificates of eligibility will be issued, since applications closed on Sept 4.

This election requires candidates to have a certificate of eligibility, and a community certificate confirming that they belong to the Malay community.

Of the five individuals who had applied for certificates of eligibility, two did not declare themselves to be a member of the Malay community.

Halimah was the only one of the three hopefuls who was automatically eligible to run, and was widely seen as the frontrunner.

In a statement, Farid said that he accepted the decisions made by the PEC and the Community Committee and that unfortunately, his presidential bid was not meant to be.

Salleh also said in a statement that he was disappointed that the committee did not give him the go-ahead.

But he said he and his team will see how he can continue to help “our disadvantaged sisters and brothers”.

He also thanked his family, supporters, friends, business associates and well-wishers for their unwavering support.

The Elections Department said that it notified all five individuals on the outcome of their applications, and also told the rejected applicants why they did not get certificates of eligibility.

However, the names of the unsuccessful applicants or the reasons given to them will not be published, said the ELD.

This follows the Constitutional Commission’s recommendation that unsuccessful applicants should not be disclosed to the public.

Such public disclosure would dissuade potential applications from stepping forward to contest the elections, it said in a statement,

However, an unsuccessful applicant is free to publish the reasons given to him or her reported by The Straits Times/Asia News Network.