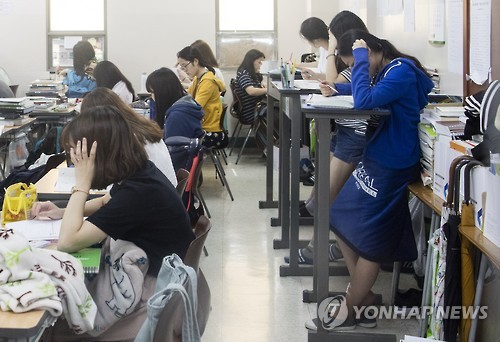 SEOUL: About one out of every four high school students in Korea sleeps less than six hours at night, due mainly to excessive studying, causing concern over their physical and psychological health, a lawmaker said, citing the outcome of an education ministry survey, South Korea’s Yonhap news agency reported, told Bernama.

According to the survey of 82,883 students in 765 high schools nationwide on their sleep between April and September last year, 43.9 per cent of the respondents reported that they slept for less than six hours per night, Rep Kim Byung-wook of the Democratic Party said.

The comparable figures for elementary school and middle school students were 3.0 per cent and 12 per cent, respectively.

By sex, 35.6 per cent of the male respondents slept for less than six hours, while the figure for female students was a whopping 52.9 per cent, according to the survey.

By region, 61.6 per cent of those surveyed in Daejeon said they could not sleep for more than six hours a night. That city was trailed by North Gyeongsang province with 50.4 per cent, Busan with 49.2 per cent, Seoul with 48.9 per cent and Jeju with 48.5 per cent.

Experts suggest their lack of sleep is attributable largely to studying deep into the night, as well as searching the Internet and playing games, and that it affects their health and development.

“It’s a regrettable reality that about half of students are only able to sleep for less than six hours because of their burdens of study and college entrance examinations,” Kim said.