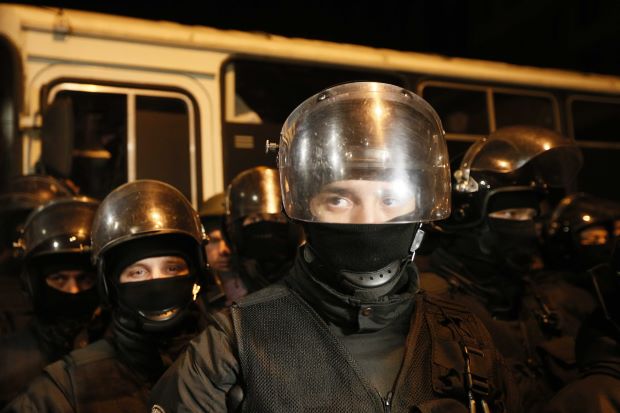 KIEV: Ukrainian police recaptured the former president of Georgia Mikheil Saakashvili on Friday, prompting further protests in central Kiev by his supporters who freed him from police custody earlier this week.

The development is the latest twist in a long feud between Ukrainian authorities and Saakashvili, who has turned on his one-time patron President Petro Poroshenko, accusing him of corruption and calling for his removal from office, told Reuters.

General Prosecutor Yuriy Lutsenko, who says Saakashvili is suspected of assisting a criminal organisation, said the opposition leader had been detained by police and was in a temporary detention facility.

“As promised, security officers did everything to avoid extreme violence and bloodshed,” he said in a post on Facebook.

Ally and fellow Georgian, Davit Sakvarelidze, who was fired in March from his post as a senior prosecutor for Ukraine, called on Kiev residents to take to the streets to protest Saakashvili’s recapture.

“Today Poroshenko broke all records and went down in history as a dictator who does this to political opponents,” he told channel NewsOne near the detention centre in central Kiev.

As of 2200 GMT, a few hundred protesters had gathered near the facility not far from the parliament, shouting ‘Shame!’ and ‘Kiev, get up!’ while a large number of police in riot gear stood guard.

Saakashvili became a regional governor in Ukraine in 2015 at Poroshenko’s invitation but they later fell out. Saakashvili denies the allegations against him.

The saga threatens to embarrass the pro-Western authorities at a time when they face a chorus of criticism from reformers and foreign donors over perceived backtracking on reforms and attacks on anti-corruption institutions.

On Friday, Poroshenko said the case against Saakashvili was legitimate and that he should cooperate with investigators.

“If he flees from the investigation, this undermines his credibility,” he said.

After escaping police custody, Saakashvili called for a rally against Poroshenko in Kiev to be held on Sunday, although he has kept a low profile in recent days after reportedly catching a cold while sleeping in makeshift protest camp outside parliament.

The politician’s latest detention followed a failed attempt by police to recapture him in a raid on the camp on Wednesday, which led to violent clashes with protesters.

While Saakashvili has a core base of supporters, he enjoys limited support across Ukraine. Only 1.7 percent of voters would support his party, the Movement of New Forces, in elections, according to an October survey by the Kiev-based Razumkov Centre think-tank.

His backers see him as a fearless crusader against corruption but critics have said that there is little substance behind his rhetoric.