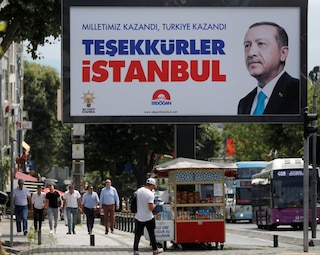 ISTANBUL: Turkish President Recep Tayyip Erdogan on Monday celebrated winning sweeping new powers in a decisive election victory, as his main rival accepted the outcome despite complaints over an unequal campaign that alarmed the EU.

A night of triumph for Erdogan saw the man who has dominated Turkey for the last 15 years declared winner of Sunday’s presidential poll without needing a second round and take his ruling party-led alliance to an overall majority in parliament.

Erdogan vowed to “rapidly” implement the new presidential system approved in an April 2017 referendum that opponents fear will give him autocratic powers and keep him in office for two five-year mandates to 2028.

The new system puts Erdogan at the top, giving him the power to appoint cabinet ministers and dispensing with the office of prime minister.

The president, 64, declared victory in Istanbul before returning to Ankara to deliver a triumphant speech at 3:00 am to tens of thousands of supporters from the balcony of the headquarters of his Justice and Development Party (AKP).

“Turkey has given a lesson in democracy to the entire world,” he added, pointing to a turnout of 88 percent.

His main rival Muharrem Ince of the Republican People’s Party (CHP), who had challenged Erdogan with an energetic campaign, broke an uncharacteristic overnight silence to concede defeat Monday.

“I accept these election results,” Ince said, adding that Erdogan should represent all of Turkey’s 80 million people and be “president for us all.”

Ince expressed alarm over the powers Erdogan assumes under the new government system which he described as “a one-man regime.”

As with other US allies and NATO, Turkey’s relations with Washington have been strained by Erdogan’s insistence on going his own way, especially on relations with Russia and on policy in Syria.

International election monitors said the election allowed voters a “genuine choice” but decried the lack of “equal” conditions for candidates to campaign.

The EU issued a notably chilly statement that did not congratulate Erdogan or mention him by name and asserted that campaign conditions were “not equal.”

German Chancellor Angela Merkel meanwhile said she looked forward to working with Turkey, especially with “a stable and pluralist Turkey in which democratic participation and rights are reinforced.”

Berlin’s ties with Erdogan have been fraught but Merkel noted Turkey’s importance in solving Europe’s migrant problem and “a longstanding friendship.”

In contrast, congratulations for Erdogan flooded in from Turkey’s partners in the Islamic world and allies who also have tetchy relations with the West, such as Russian President Vladimir Putin who praised Erdogan’s “great political authority.”

The Kremlin statement even noted the “mass support of the course conducted under his leadership.”

Erdogan has transformed Turkey first as prime minister from 2003 to 2014 and then as president, giving Islam a greater role in public life and giving the country a much more assertive profile on the international stage.

But critics accuse him of ruling with an iron grip, especially after a failed coup in July 2016 which was followed by a state of emergency that has seen tens of thousands of people arrested.

The poll outcome relieved investors who had feared a prolonged period of uncertainty if the election went to a second round, but the Turkish lira pared initial sharp gains against the dollar.

According to results published by the state news agency Anadolu, Erdogan won 52.6 percent of the vote, with Ince on 30.6 percent.

Erdogan, who enjoys sky-high support in parts of the Anatolian heart of the country, improved on his 51.8 percent score from 2014.

The pro-Kurdish Peoples’ Democratic Party (HDP) candidate Selahattin Demirtas came third with 8.4 percent, a performance all the more remarkable given he has been jailed on charges of links to Kurdish militants since November 2016.

With Turkey holding parliamentary and presidential elections on the same day for the first time, Erdogan was also able to enjoy an overall majority in parliament with the help of his allies from the right-wing Nationalist Movement Party (MHP).

The AKP won 295 seats in the 600 MP chamber but the MHP did far better than expected, winning 49 seats and giving their alliance a clear majority, according to results published by Anadolu.

The HDP easily broke through the 10 percent minimum vote threshold to pick up 67 seats, sparking wild celebrations in its Kurdish-majority stronghold of Diyarbakir.

In a tweet, Demirtas hailed a “great victory” despite suffering “the biggest injustice of the campaign.”–AFP