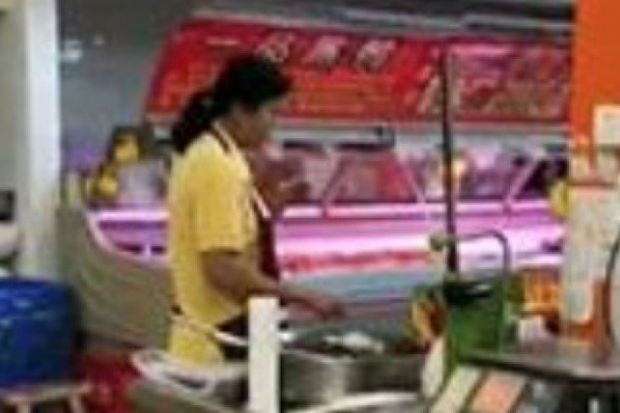 A Chinese supermarket worker has been fired for eating cooked snails and throwing the shells back into the pile of food for sale, an online news portal reported.

The woman was seen picking snails out of the skillet and eating them at a branch of Century Mart in Yongzhou city, Hunan province, according to video footage published by Thepaper.cn.

The incident, which took place on Monday, was captured by a member of the public, who uploaded the footage onto Weibo.

“This is so disgusting, if this person has some transmittable disease then it would be disastrous,” one web user said.

“We would like to express our sincere apologies… We will give more attention to the management and hygiene [of the store] from now on,” the notice read.

But the note from the store’s cooked foods section risked a further backlash by signing off with the warning: ”We reserve the right to pursue legal action regarding any malicious hyping up of the incident.”

This prompted some Weibo users to ask why the store would accuse people of hyping up the incident when it was “so evident” what had happened.

“We are just worried that people will make a big fuss about this incident and our competitors in the market will use this to harm our reputation,” a supermarket spokeswoman named Li told the news portal.

Li said the supermarket required staff to have a health check every year and the fired female worker had no recorded infectious diseases.

So far, no consumers are known to have asked the supermarket for compensation over the incident reported by the star.