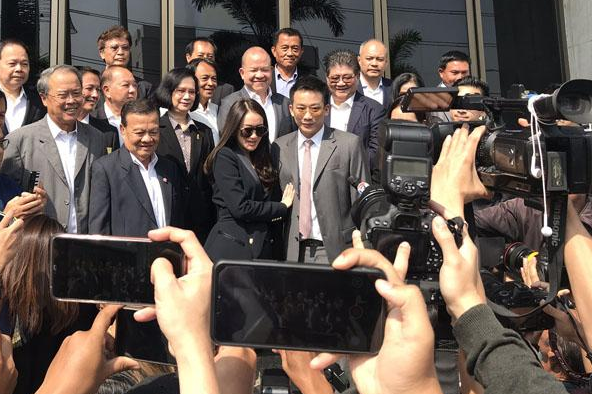 BANGKOK – The son of fugitive former Thai prime minister Thaksin Shinawatra arrived at the office of the attorney-general on Wednesday to face an indictment for money laundering, in a move his supporters called politically motivated.

Ahead of a general election scheduled for next year, supporters of the Shinawatras, backed by poor, rural voters, accuse the military government, which took power after a 2014 coup, of seeking to hobble the family and its allies.

The military government denies it is singling out the family.

On Wednesday, Panthongtae Shinawatra, 38, also known by his nickname “Oak”, was accompanied on his visit to the authorities by both his sisters and many senior members of the Thaksin-backed Puea Thai Party.

“Panthongtae Shinawatra will be prosecuted…on charges of money laundering and conspiring to launder money of the amount of 10 million baht,” the Attorney General said in a statement, told Reuters.

Last year, authorities formally charged him with having received a cheque for 10 million baht (231,019 pounds) in 2004, in relation to a prior corruption case over fraudulent loans of 9.9 billion baht made by state-owned Krungthai Bank when his father was prime minister.

Panthongtae declined to speak to reporters. His lawyer declined to comment when contacted by Reuters.

“I believe that Oak did not know the money he received came from wrongdoing,” Watana Muangsook, a member of the Puea Thai Party, told reporters.

If found guilty of the charges, Panthongtae could face a jail term of up to 10 years.

Thaksin, whose populist movement’s struggle with the Thai establishment has dominated politics for more than a decade, lives in exile after fleeing Thailand to escape a jail sentence for corruption following his overthrow in a 2006 coup.

His sister, Yingluck Shinawatra, overthrown as prime minister in 2014, fled Thailand in August last year to avoid conviction in a criminal negligence case she said was politically motivated.

Later, she was sentenced in absentia to five years in jail.