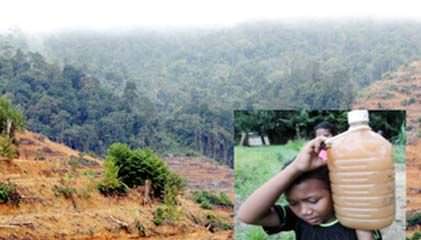 GUA MUSANG: Years of protests have come to naught for an estimated 10,000 orang asli who are living in dire straits due to extensive logging and forest conversion in Kelantan.

Orang asli activists, who have accused the state government of turning a deaf ear to their grouses, are now upping the ante in the battle to have their land rights legally recognised.

One of them, Dendy Johari, 20, claimed that Mentri Besar Datuk Nik Abdul Aziz Nik Mat’s administration was not taking responsibility for their welfare.

“The MB must understand our problems as they affect us directly, day in and day out. We are not greedy for a lot of land.

“We just want our native territory to be ours and left unspoiled.

“We want to live in a forest full of natural resources.”

He said the orang asli were also disappointed with the state Orang Asli Development Department (Jakoa) as it had not assisted them despite numerous complaints about logging.

Water tanks were installed at the villages in 2010 but the water ran out within weeks, he claimed.

“We joked that the water tanks in the villages were mere decorative items. What use are they?

“We still rely on the river for our water needs,” he said.

Another orang asli activist, Awir Awe, said their villages, while left untouched, were surrounded by vast areas of logged forest which had been converted to monocrop industrial plantations, including latex timber clone plantations.

This has affected their livelihood as they depended on the forests for their food and materials for their craftwork, medicine and other daily requirements.

The logging, he claimed, had also muddied the rivers, while pesticide use in plantations had triggered fears of water pollution and health issues.

However, Awir said the orang asli were no longer taking the pillaging of what they deemed as their “native territory (wilayah adat)” lying down.

They are outraged that all of these activities have been done throughout the years with scant regard for their well-being as well as no prior consultation with them.

Awir is one of a rising number of people who have been fighting for their land rights to be legally recognised by the state government.

Memorandums had been sent, protests and blockades held, and complaints made but to no avail, he claimed.

“Now we are compiling evidence of the history of our occupation in this territory to show how we have used the land for years. Then we will bring this to the court, we will never give up,” he said.

He said they had also documented the chronology of events whenever a new area had been breached, including details about the company involved and the complaints made.

Due to the logging, Awir said even small animals such as squirrels, monkeys and wildboar that the orang asli hunted for food were becoming rare.

“It takes us six hours to hunt for game. When the rivers turn muddy, our rice turns red when we cook it because we have no other water source,” he said.

Kg Guling resident Adi Buru, 54, said all land surrounding the village had been converted into an oil palm plantation without prior engagement with the orang asli.

“Because of the polluted river as well, our children have worms in their stomachs and often have diarrhoea,” he said.