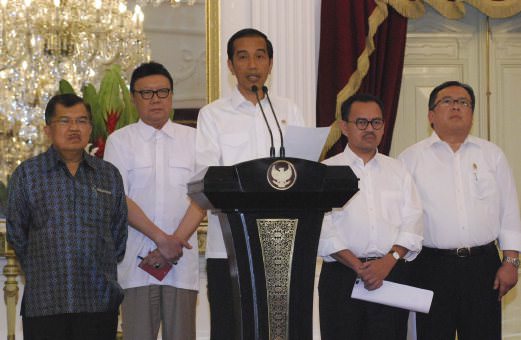 JAKARTA: Indonesian President Joko “Jokowi” Widodo yesterday raised fuel prices to free up funds for ports and programmes for the poor, fulfilling an election pledge to curtail a decades-old subsidy that has constrained government finances.

The price of subsidised petrol will increase to 8,500 rupiah (RM2.33) a litre from 6,500 rupiah from today, Widodo announced at the State Palace in Jakarta yesterday evening, flanked by his Economic and Social Affairs ministers.

Widodo is seeking to boost economic growth from its slowest pace since 2009 and reduce Indonesia’s vulnerability to fluctuations in international crude prices.

About 276 trillion rupiah had been earmarked for fuel subsidies in the 2015 budget, or 13.5 per cent of total spending, while oil imports have contributed to a persistent current account deficit.

Indonesia’s gross domestic product grew 5.01 per cent in the third quarter from a year earlier, its slowest in five years, highlighting the challenges Mr Widodo faces in trying to turn around the economy.

Although the hike had been widely anticipated, the President said it was a difficult choice and the government finally decided on the move after a series of discussions to switch the subsidies to productive investment.

“Hopefully, the decision to shift the subsidy to the productive sector will open the door for a budget that will be more beneficial for the Indonesian people,” Widodo said.

Indonesia’s full-year inflation is likely to be 7.3 per cent after taking into account the fuel price rise, Finance Minister Bambang Brodjonegoro said after the announcement. It will free up about 100 trillion rupiah of state spending and reduce the 2015 budget deficit from the current 2.2 per cent, he said.

“Some will be allocated to infrastructure and some to strengthen the social security for poor and near-poor families,” Brodjonegoro added. Some of it would be used “to materialise the vision of the President to develop the maritime sector”, he said.

After taking office last month, Widodo set up new ministries in his Cabinet, such as the Coordinating Maritime Affairs Ministry, as part of his plans to improve the country’s maritime and transport infrastructure and reinvigorate the sluggish economy.

Indonesia has been subsidising fuel since the first oil price shock in the 1970s and kept prices at less than US$0.20 per litre until 2005, showed a World Bank report published in March. The price of petrol at the pump was raised last year to 6,500 rupiah per litre from 4,500 rupiah.

Trade unions and opposition politicians criticised the move. “This is not a wise decision right now,” said Bobby Rizaldi, a member of the Golkar party, part of the opposition majority coalition. “Electricity prices have just been raised recently, the currency has been under pressure and now the inflation will be higher than we anticipated at the beginning of the year.”

Social assistance will be available to 15.6 million people from today, Chief Economics Minister Sofyan Djalil told reporters, as part of the government’s drive to soften the impact of the fuel price rise on the poor. -Agencies