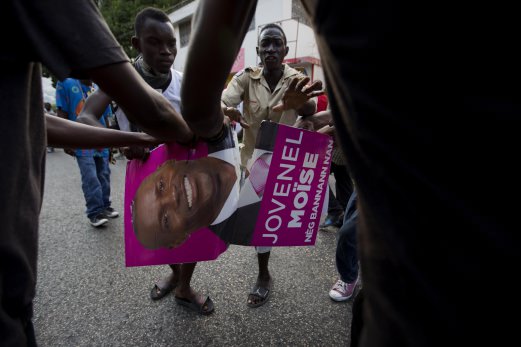 Moise Jean Charles got 11.04 percent and Maryse Narcisse 8.99 percent. Any candidate who wins more than half of the votes cast is considered the victor.

Haitian law offers candidates the opportunity to challenge the results from the presidential and legislative election in electoral courts, before final results are due to be published on December 29.

The country was on edge as the results were announced, after past episodes of sometimes bloody violence in a desperately poor country marred by repeated episodes of political upheaval.

Interim leader Jocelerme Privert called for calm ahead of the vote result announcement.

“Resorting to acts of violence can only spoil the fruits of the beautiful day we had on November 20,” Privert said at the presidential palace in Port-au-Prince, referring to the vote held earlier this month.

The election was a key step in restoring constitutional order in Haiti, where Martelly’s mandate expired after the results of last year’s first round poll were annulled amid widespread claims of fraud.

Nearly 6.2 million people were eligible to vote in the Western Hemisphere’s poorest country, parts of which are still struggling to recover from a devastating hurricane.

Of the 27 candidates who ran for president, four had claimed victory in the first round before the official announcement in statements criticized by the international community.

“My compatriots, our country is living through a dramatic moment. It needs a social cooling off, it needs calm, serenity, peace and tranquility,” Privert said.

“My brothers and sisters, I invite you all to use the means of recourse set forth in the electoral decree and constitutional provisions to defend your legitimate rights.”

Haiti’s election was originally held in October 2015, but the results were eventually scrapped amid opposition protests after an independent commission found massive fraud. With the results annulled, Martelly, a popular singer elected in May 2011, was unable to transfer power to a successor chosen by popular vote, as required by the constitution.

The legislature chose Senate chief Privert as interim head of state – initially with a three-month mandate – but new polls were delayed amid civil unrest and political infighting.
The first round of the presidential election was scheduled again for October 9 this year, but was delayed after Hurricane Matthew pummeled the country a few days before.