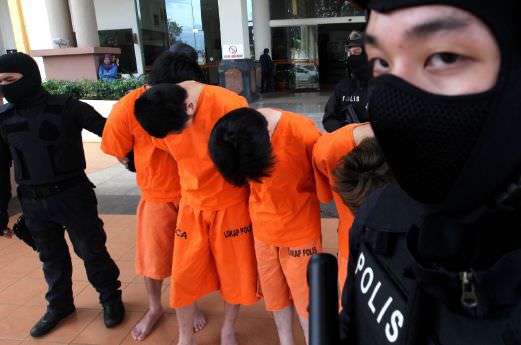 KUANTAN: Four men with alleged ties to an underworld gang were hauled to court here today to face charges linked to the kidnapping of a businessman who was held for RM19 million ransom.

In the magistrate’s court, Low Sing Hwa, 29, and Tham Hock Ann, 36, indicated they understood the charge read to them of kidnapping Datuk Chin Yoke Choon, 53, to secure the ransom money.

The duo, with three others who are still at large, are alleged to have kidnapped Chin, who is the managing director of Tunas Manja Group, at the parking lot of a hotel at Bandar Indera Mahkota here, at 5.55pm on Dec 26, last year.

The victim was later freed. Low and Tham may be sentenced to death if convicted under Section 3 of the Kidnapping Act 1961.

Later, at the sessions court, the duo claimed trial to being members of underworld group “Geng William”, an offence that may see them jailed for up to 20 years if convicted under Section 130V(1) of the Penal Code.

During the same proceedings, two other men linked to the kidnapping, Liew Chee Hwa, 29, and Choo Jia Lerk, 23, pleaded not guilty to fraternising without good cause with the same underworld group.

They face a maximum jail term of 20 years and fine if found guilty under Section 130Y of the Penal Code.

Judge Siti Aminah Ghazali did not grant bail, as the four men were detained under the provisions of the Security Offences (Special Measures) Act 2012.

She fixed Jan 24 for mention.

All the cases at the magistrate’s and sessions courts are expected to be transferred to the High Court here later.