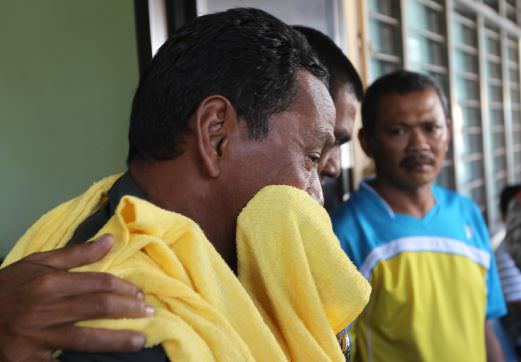 MUAR: Two families – one in Tiruchirappalli, India and another in Marang, Terengganu – are mourning the deaths of two men who were among the 14 people killed in the horrific bus crash near Kampong Jayor, Pagoh, yesterday.

In Johor Baru, friends and loved ones are grieving over the passing of Abdullah Hadi Yusof, 47, who was described as a philanthropist who always spent his time at the mosque.

Sharbudeen Abdul Gaffor, 58, vice-chairman of the Johor Baru Indian Muslim Mosque Association said Abdullah was a pillar of the association, as he contributed much towards the mosque and the association’s welfare.

He said Abdullah was a jeweler who came to Malaysia from Tiruchirappalli, India, three years ago to open a jewellery store with a relative in Kuala Lumpur.

“He often came down to Johor Baru and was always engaged in community services with the Johor Baru Indian Muslim mosque at Jalan Dhoby,” he said.

He added that Abdullah is survived by a wife and two children: a 21-year old daughter and 12-year old son who live in their home in Tiruchirappalli, Tamil Nadu, India.

“The relative in Kuala Lumpur has informed his family back in India, and he will be coming down today to claim Abdullah’s remains,” said Sharbudeen, adding that the remains will be repatriated to India.

He said he learned of Abdullah’s death from a picture of the accident which went viral on social media.

“I was sure it was him, as he was wearing the same shirt when we last met on Friday when he was in Johor Baru,” he said.

Sharbudeen said Abdullah had told him that he was going to Kuala Lumpur by bus on Saturday night.

“His death is a great lost to everyone,” he said.

His body was claimed by his father, Wahab Jusoh, at the Sultanah Fatimah Specialist Hospital in Muar, Johor, and taken to Kampung Rawai, Bukit Payung, in Marang.

A visibly upset Wahab, who accompanied the remains, said his son had wanted to go to Kuala Lumpur for a short trip. “He had recently switched jobs.

The last time I met him was during Hari Raya Haji,” said Wahab. He said Hisham was single and had been working in Johor Baru for a while.

Fourteen people were killed and 16 others injured when the Alisan Golden Coach Express bus plunged into a ditch and crashed into the wall of an underpass at Km137.7 of the North-South expressway near Kampung Jayor, Pagoh, Johor about 3.45am yesterday.-nst