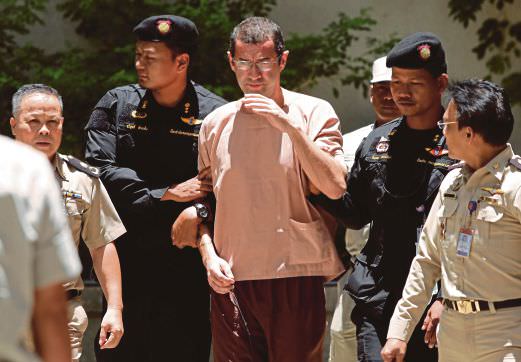 BANGKOK: Swiss national Xavier Andre Justo has appealed against the three-year prison term handed down to him by the Bangkok South Criminal Court on Aug 17 for blackmailing his former employer, PetroSaudi International.

Among the reasons for the appeal was that Justo did not tamper with the documents he obtained from PetroSaudi and it was his first offence.

This raises a question: If Justo did not tamper with the documents, then who did? Was it Sarawak Report editor Clare Rewcastle Brown or others? Worrasit told Bernama that any damage to the image of Prime Minister Datuk Seri Najib Razak was because of the activities of third parties, who had doctored or tampered with the documents they received from Justo.

He said Justo did not tamper with the documents.

“Those who doctored the information have to take responsibility and face legal action,” Worrasit said after filing the appeal.

He said in his opinion, Justo’s role in the case was not serious, as the documents had been tampered by other people.

He said it was the first time Justo had committed an offence, and so, he should not have to undergo the heavy punishment given and instead, could have a lighter sentence.

“It should be a six-month or one-year jail term, or a suspended sentence or just a fine.”

Worrasit said while the normal appeal period was 30 days, Justo was given an extra 30 days to give time to him, as the new lawyer, to prepare the documents for the appeal.

As to how Justo was doing at the moment, Worrasit said his client had adapted to the environment.

“I visit him every week, already about four to five times now. Justo said he is fine. He has many friends and they understand him, as he is a likeable man.”

Justo was sentenced to three years’ jail after pleading guilty to blackmailing PetroSaudi. He was arrested at his house on Samui Island in the southern province of Surat Thani on June 22 after PetroSaudi officials filed a complaint that he had attempted to blackmail the company for 2.5 million Swiss francs with documents stolen from PetroSaudi.